BMG has inked a global deal to administer George Harrison‘s Harrisongs publishing catalog, which includes such iconic gems as “Here Comes the Sun,” “Something” and “My Sweet Lord,” as part of an expansion of the company’s partnership with the former Beatle’s estate.

The pact also builds on BMG’s joint venture with Dark Horse Records, started in 2020 to revive the label Harrison launched in 1974. Dark Horse has signed a new licensing agreement with the Leon Russell estate for 16 albums by the late singer/songwriter and Harrison friend, as well as with Joe Strummer’s estate to administer the Clash co-founder’s music publishing. Also, Dark Horse will release new albums from Billy Idol and Tom Petty and the Heartbreakers keyboardist Benmont Tench, and create an e-commerce store called DH Merchandise.

“It is hugely important to us,” says Thomas Scherer, BMG president of repertoire and marketing, New York and Los Angeles, of the Harrisongs deal and the broadening of the Dark Horse arrangement. “I think this will have an impact for our business moving forward. For other artists that feel related to George and to his music, they can see how we work with the catalog.”

BMG CEO Hartwig Masuch added in a statement, “George Harrison stands at the pinnacle of what it means to be an influential and successful artist and it is telling that of the 188 original songs released by the Beatles during their career, it’s George’s ‘Here Comes The Sun’ which is by far the most played on Spotify. It is an honor for all of us here at BMG now to be representing the Harrisongs catalog. The Harrison estate is rightly fiercely protective of George’s legacy, and we will do our best to reward their faith in us.”

Harrisongs Limited includes more than 200 songs, including Harrison’s Beatles’ classics, music from his 12 solo studio albums and his songs recorded as part of The Traveling Wilburys supergroup, such as “End of the Line” and “Handle With Care.” Concord had previously administered the catalog since 2016. Financial terms of the Harrisongs publishing deal were not revealed.

Harrison’s son, Dhani, who runs Dark Horse with David Zonshine, and helps oversee his father’s estate with his mother, Harrison’s widow Olivia, says having the publishing entity alongside Dark Horse at BMG “makes everything easier,” and allows them “ultimately to have the control and focus on deeper cuts in the catalog, on doing deep dives and working creatively to build more packages for publishing, for movies [and] for adverts.”

BMG’s relationship with Dhani extends back to 2014 when BMG bought Vagrant, the label home for Dhani’s band thenewno2. From there, BMG also became the home to Dhani’s music publishing and recording efforts, including his most recent solo studio album, 2018’s IN//PARALLEL. Also, in 2016, BMG released George Fest: A Night to Celebrate the Music of George Harrison, a live concert tribute album. 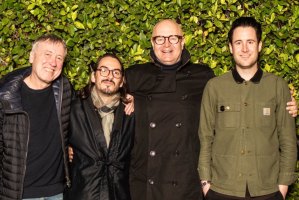 From those projects, organic discussions arose on how to grow the partnership. “I remember very vividly we had a conversation [and] Dhani was sharing that he wants to create a home for Dark Horse Records, for George’s music and his own music,” Scherer says.

For Dhani, the idea is to build a safe haven for “friends and family,” some of whom had direct connections to his father, and for those, like Dhani, who are trying to honor their loved one’s legacies. “Really, what we’re doing here is the same thing we did for my dad’s catalog, which is just putting a big hug around it and protecting it and we’re willing to do that for our fellow artists on Dark Horse,” he says.

It’s a sentiment appreciated by the artists. “The Harrisons set out to revive an intimate, hands-on label and have succeeded,” Idol tells Billboard. “It’s a family affair and it feels like it.”

Dhani can draw on the two decades of experience he has had working with his father’s music since Harrison died in 2001. “I’ve seen how sad it is to lose a wonderful artist in a family and what it does for the family. And then what the exposure to the music industry does to the family. You know, it’s not a kind industry and there are wonderful people in it, and we just hope to pull them all together where we can be kind to each other and celebrate each other’s catalogs.”

While catalogs for legacy artists are selling at record prices, Dhani sees Dark Horse as a place for acts and estates who want to keep ownership in the family. “That’s where we come in,” he says.

Dark Horse was the perfect fit for the later works from Russell, who died in 2016 and was introduced to a new generation through his 2010 T Bone Burnett-produced album with Elton John, The Union, says Dub Cornett, creative executive for the Russell estate. The licensing agreement covers Russell works from the ’90s and beyond, including unreleased archival material. (Much of his ’70s earlier works belong to Universal Music Group.)

“I had met the Harrisons years ago and they are great folks,” Cornett says, “so when I was introduced to David Zonshine to discuss Leon, he had a simple pitch: ‘Dhani and I see Dark Horse as a family dinner table, filled only with the people that George would want there. He loved Leon and would be honored to have him at our table.’ Just watch a few minutes of [Harrison’s groundbreaking 1971 multi-artist benefit] Concert for Bangladesh — you can see how George and Leon felt about each other and David and the Harrisons have made us feel the same.”

Dhani says they have just begun “doing discovery”: on the Russell treasure trove, but that he wants fans to have input in what comes out. “That’s what we’ve been doing with my dad’s catalog, which is we listen to the fans because we want to give them what they want and we’re all fans,” he says.

With the new deal with Russell, the Dark Horse catalog numbers more than 50 titles, including the George Harrison-produced Ravi Shankar Chants of India, Ravi Shankar & Ali Akbar Khan In Concert 1972 and Joe Strummer & The Mescaleros’ albums Rock Art and The X-Ray Style, Global A Go-Go, Streetcore and Attitudes’ Ain’t Love Enough: The Best of the Attitudes, all of which have already been reissued under the BMG deal.

Dark Horse is firming its upcoming release slate—and like most labels is dealing with the lingering pandemic and supply chain issues— but plans call for celebrating what would have been Strummer’s 70the birthday this year with Joe Strummer 002, a box set that follows 2018’s similarly themed archival Joe Strummer 001. Also, for Record Store Day, Dark Horse will release Shankar’s “I Am Missing You” on vinyl and then by the end of the year, will release Shankar Family & Friends, the celebrated Harrison-produced 1974 album that featured the track.

Plans are also underway for the 50th anniversary of Dark Horse in 2024. “We want to celebrate the whole catalog of Dark Horse from the original artists, which hasn’t been done as vinyl,” Dhani says. Also under consideration is a Dark Horse box set. “We’ve been having fans banging me on the head for years and years and years, saying, ‘Please do a Dark Horse box set.’ And these things take time. It’s really only three of us doing it and that’s what brings the consistency to the whole thing. When you turn a page in a Joe Strummer box, it’s same as turning the page in a George Harrison box set. And I can’t emphasize to you how much that makes my OCD happy.”

The wellness music series includes meditation and other relaxation music. “It’s just a way to service the needs in our world to have the possibility to relax, to mediate and to use that music to really calm down,” says Scherer, who used to be a yoga teacher.

Dhani has a background in design and has joined with other companies to create a toy store housed within DH Merchandise that will include such items as previously unreleased garden gnomes, like the promotional gnomes in last year’s massive, Grammy-winning 50th anniversary box set for Harrison’s classic All Things Must Pass album released by Universal Music Enterprises.

For Dhani, looking for ways to bring BMG more into the fold is a goal. “I still have partnerships with Universal, obviously, because of my dad’s masters and because of the Beatles, so I’ll always be working with them. So, we’re working with multiple companies, it’s not just BMG. But BMG is where we’re planting our family roots.”

BMG to Admin George Harrison’s Publishing, Expands Dark Horse Records Partnership BMG has inked a global deal to administer George Harrison‘s Harrisongs publishing catalog, which includes such iconic gems as “Here Comes the Sun,” “Something” and “My Sweet Lord,” as part of an expansion of the company’s partnership with the former Beatle’s estate. The pact also…