After a two-year hiatus because of the COVID-19 pandemic, CMA Fest returns in full force to Nashville June 9-12 with such heavy hitters as Jason Aldean, Luke Combs, Carrie Underwood and Kane Brown playing the 49th edition. 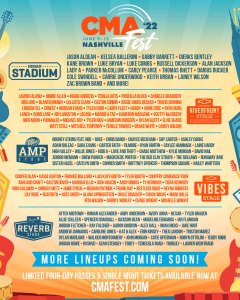 “We’ve been waiting two years to host Country Music fans from coast to coast and every corner of the world,” said CMA CEO Sarah Trahern in a statement. “Now we’re two months out and the excitement is palpable! We can hardly wait to bring the country community back together in June.”

Four-day passes for the Nissan Stadium shows range from $235 to $1,433 are available at cmafest.com. A limited number of single-day tickets will also be available starting at $82. Fees and taxes are included.

The four daytime stages are free and open to the public, although this year CMA Fest is selling tickets to Riverside Retreat, which guarantees access to the Chevy Riverfront stage, as well as shaded areas, misting stations, charging for mobile devices and air-conditioned restrooms for $307 for all four days or $98 for single-day tickets.

Nighttime concerts at Ascend Amphtheater and Fan Fair X activities inside the Music City Center will be announced in coming weeks. Artists donate their time to play with a portion of the ticket proceeds going to music education programs throughout the U.S. through the CMA Foundation.