For 35 years, music legends including Elton John and Duran Duran raised the roof at 8801 Sunset Blvd, home to Tower Records’ historic flagship location, with jam-packed autograph sessions and live performances. Now, the West Hollywood building is undergoing construction to make way for its new tenant, streetwear and skate brand Supreme, and that roof is literally gone.

The currently beige building is expected to be painted white in accordance with Supreme’s branding, according to a rendering presented at a virtual town hall in January where residents expressed concerns about flash mobs and customers camping outside. 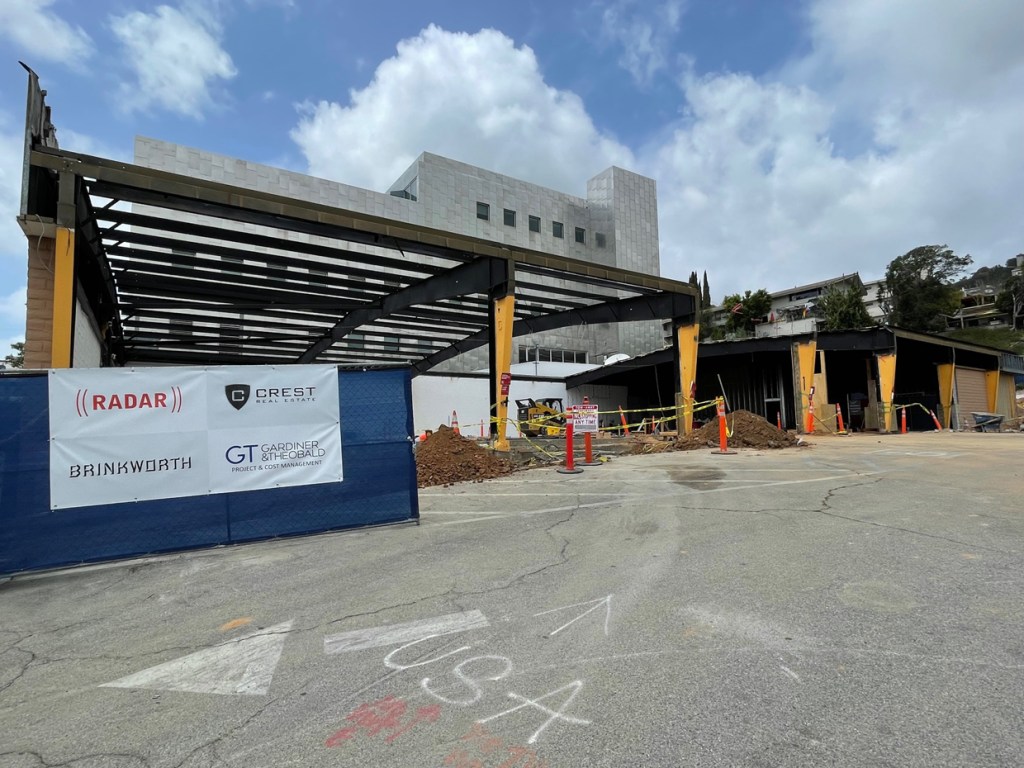 A view of the former Tower Records building in West Hollywood, under construction for a new Supreme location.

This isn’t the first time the exterior of the historic building has changed, though. In 2006, when the famed music chain filed for bankruptcy for a second time (the first was in 2004) and shuttered all of its approximately 200 locations, the iconic Tower Records sign was painted over. A year later, Chicago-based developer Sol Barket bought the property, along with two business partners, under the name Centrum Properties for $12 million (investment firm Angelo Gordon joined the partnership in 2010), with plans to demolish the building and erect a five-story retail complex with two video billboards and a supergraphic.

Over the phone from his Chicago office, Barket says his vision for the property was inspired by the Frank Gehry-designed bandstand in Chicago’s Millennium Park. “I was walking down the street and I had a direct view of this bandstand which was so whimsical,” he says. “I took pictures and went back to my office and called [design firm] Gensler and said, ‘Make it look like this.’ We wanted to develop something special. I was sad not to see it get built. It would have been spectacular.”

While those plans, which were scaled back but ultimately rejected twice by the West Hollywood City Council, were being developed, the building was leased to various companies for pop-up events. In 2007, Warner Brothers Records leased it to promote the White Stripes’ Icky Thump album, painting it the band’s trademark red and white. From 2008–2013, Live! On Sunset followed, painting it white with silver signage, and then in 2014 short-term tenant Flipagram painted the building orange.

Throughout the years, preservationists have lobbied unsuccessfully to have the building declared a local cultural landmark, but those ultimately failed with a unanimous West Hollywood Preservation Commission vote in November 2013 not to grant historic status.

Toward the end of 2014, iconic guitar brand Gibson leased the building for 15 years and painted it beige. The beloved Tower Records sign was painted back onto the building in 2015 for the premiere of Colin Hanks‘ celebrated documentary All Things Must Pass: The Rise and Fall of Tower Records.

In 2018, Gibson declared bankruptcy and the lease was voided. By that time, Barket and his partners had sold the property for $35 million to new owners who registered the property under the name Tower Records Square, LLC. The building remained without a tenant for two years until December 2020, when Supreme signed a 10-year lease with an additional five-year option.

Seeking to pay homage to the location’s legacy, Supreme, named for John Coltrane album A Love Supreme, wanted to keep the Tower Records sign on the building, says real estate broker and Newmark Knight Frank vice-chair Jay Luchs, who brokered the deal (and brokered both the Gibson lease and the sale from Barket to the current owners).

With the rise of vinyl sales in the past couple of years, however, Tower Records, now-owned by Dutch businessman Roald Smeets (who purchased the brand and IP out of the bankruptcy proceedings), bounced back in 2020 as an online store. Now, the famed music chain has plans to revive its physical presence, starting with the opening of a physical location this summer in Williamsburg, Brooklyn, followed by a series of pop-up shops involving collaborations with artists, brands and labels.

2017: What Does Supreme’s Billion-Dollar Valuation Mean for Music’s Hypebeasts?

To avoid confusion between the brands, a Tower Records spokesperson tells Billboard via email that Tower granted Supreme permission to use the existing Tower Records sign, royalty-free, provided there was a “corner of the store selling a curated selection of Tower music and/or branded merchandise; a Tower listening bar; and/or joint Supreme-Tower record launches and events.”

When Supreme wouldn’t agree to have a Tower Records presence inside the store, Tower asked for the sign, offering to pay to have it sent to Brooklyn. However, Supreme said it was painted onto the building and couldn’t be removed, and agreed to paint it over. A few months later, when the sign was still on the building, Tower Records’ lawyer requested its removal and then Supreme finally painted it over.

In a statement to Billboard via email, Tower Records president Danny Ziejdel says, “Like all Tower Records fans, I was saddened to see the Tower Records signage on Sunset Boulevard removed despite our best efforts to keep it in place above some form of Tower Records offering. However, we could not allow it to remain over an unrelated retail store with no homage or relevance to Tower Records.”

Still, Tower Records says the relationship between the parties remains amicable, and they are open to reinstating the sign on the basis that there is a Tower presence inside the store.

Supreme, which declined to speak with Billboard for this story, is expected to shutter its Fairfax District location when the new store opens, though that date hasn’t been announced yet. Construction signs on the property display August 2022 as the project’s completion date. 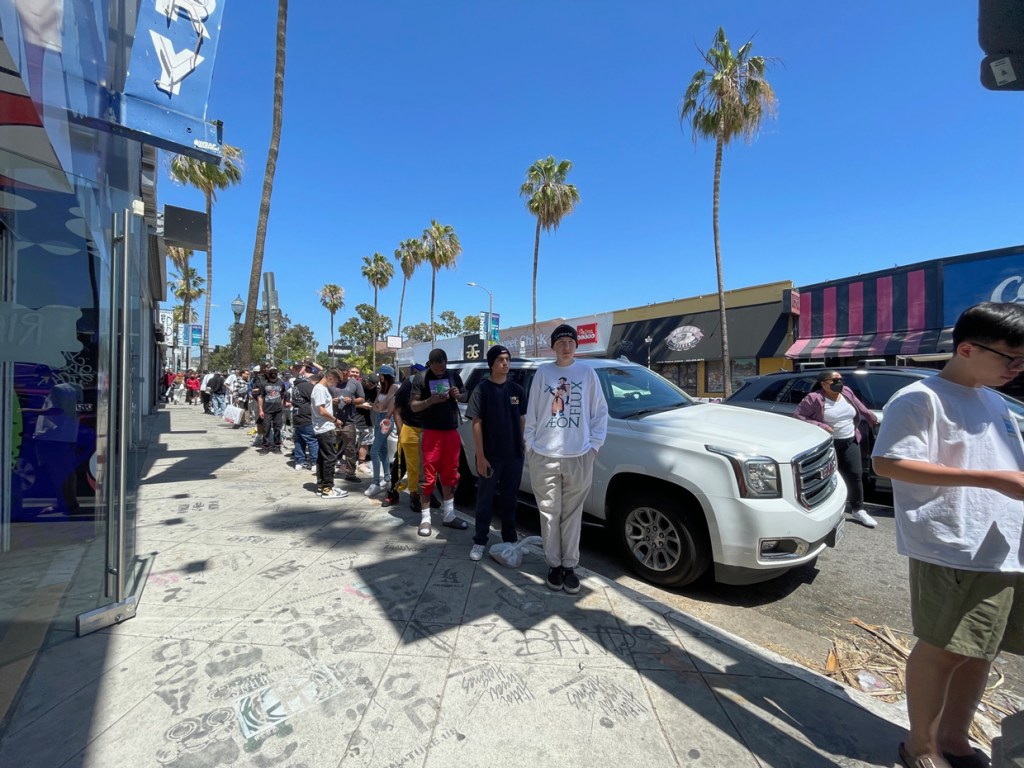 Dozens of customers lined up down Fairfax Avenue outside Supreme’s current location in Los Angeles on Thursday, April 14 2022.

On Thursday, there were approximately 75 customers lined up down Fairfax Avenue outside Supreme’s current location in Los Angeles. 33-year-old Brandon Chustz, a regular customer, says he looks forward to the forthcoming store. “It’s going to be good for the brand… expansion’s always good,” he says.

Chustz, who notes he was a customer at the West Hollywood Tower Records, is excited about the new Supreme location and would like to see the brands team up together. “I used to love Tower Records. It’s iconic and a great move for Supreme,” says Chustz. “They should keep the Tower Records sign and just add the Supreme logo to it. Supreme Tower Records collab!”

In the meantime, while details about the forthcoming Tower Records space in Brooklyn are still under wraps, a Tower spokesperson tells Billboard, “We will offer a hybrid experience coupling the in-store performances Tower was best known for in its heyday with new music discovery experiences. It will not be a store in the traditional sense but we have plans to have limited-edition albums for purchase.”