How Becky G and Karol G Finally Came Together for ‘Mamiii,’ Despite Dueling Labels

How Becky G and Karol G Finally Came Together for ‘Mamiii,’ Despite Dueling Labels

Becky G and Karol G. The two Gs. How often do you get two stars, close in age, close in genre, with parallel career tracks and identical surnames (or in this case, identical initials)?

It was only a matter of time before fans started to wonder when the two Gs would record together. It almost happened in 2018, with Becky G’s “Sin Pijama (No Pijamas),” a track Karol G considered, but ultimately didn’t jump on. Since then, the possibility of the two Gs recording together has remained elusive.

That all changed on Feb. 10, when, with little notice, the two superstars dropped the collaborative single “Mamiii.” Produced and co-written by their mutual friend Ovy on the Drums, the song – a power anthem about overcoming a toxic relationship – became a swift hit. Although released on the last day of Billboard’s chart tracking period, the following week “Mamiii” debuted at No. 15 on the Hot 100, the highest-ever position on the chart for either artist. And on Billboard’s Hot Latin Songs chart, it debuted at No. 1, where it has so far spent eight weeks in the top spot.

There’s still room for growth and momentum is headed in the right direction to continue the track’s chart-topping run: The duo performed “Mamiii” together live for the first time at Karol G’s Coachella set last weekend, Becky G’s new album Esquemas is due out due out May 13 on Sony Music Latin (Kemosabe Records/RCA Records), which will include “Mamiii,” with more promotion to come.

Ben Tischker and Marc Jordan, Becky G’s co-managers, tell us how two stars from rival labels (Becky G is on RCA/Sony, Karol G on Universal Music Latino) managed to write, produce and release a a global hit in less than a month, and take it to No. 1 without even a video.

“We’ve been managing Becky for 12 years, since she was 13 years old,” says Jordan. Adds Tischker, “She’s like our daughter.” The two have other ventures (Tischker oversees Wide Eyed Entertainment with his wife Beka and Jordan oversees entertainment company State of the Art) but co-manage Becky G through their joint company WIP (West Indian Paris), so named after their backgrounds: Tischker is French, while Jordan is West Indian American. WIP also handles Latin star producer Edgar Barrera as well as artists like Spreadlof, Vibarco and Angel22. 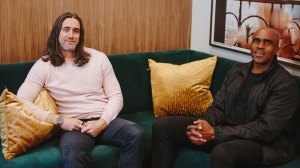 Their first foray into Latin music was Becky G, who decided to dig into her Mexican background after launching her career in English. At that point, Tischker and Jordan made the choice to immerse themselves in Latin culture and be “humble enough” to learn.

“Ben and I said to ourselves, we are two gringos that don’t know s—,” says Jordan.

One of the first pieces of advice they got came from Sony Music Latin-Iberia chairman Afo Verde, who told them: “Don’t dial it in. Don’t be gringos who call on the phone and tell us what to do. Get on a plane and talk to us.” says Jordan. “That first year, we must have gone to Miami 22 times. We said, ‘OK, we are going to learn with you, and you guys are going to be our partners and we’re going to make decisions in partnership.’ We wanted to learn about Latin music and we wanted to make the necessary relationships so Becky could have a great career.”

In January, Becky G was deep into Esquemas when Ovy on the Drums’ attorney, Stephanie Chopurian, called Tischker to tell him Ovy had a “hit” for Becky. “He sent Becky the verse and the chorus and we all fell in love with the song,” Chopurian says.

Tischker subsequently invited Ovy to Becky G’s Los Angeles studio to work on the track; at the time, they discussed collaboration possibilities with different male artists. “Two days later, he calls me [and] puts Karol on the phone,” Chopurian recalls. “Karol said, ‘I love this record.’”

Karol G went on to write her very salty verse, which many have interpreted as being aimed at her ex, Anuel AA. the two singers made final tweaks in Los Angeles in January.

“That was 10 days before the song came out,” laughs Tischker. “When [Karol G’s manager] Noah Assad gets involved, it goes very quick. From hearing the record, to the record being out, it took a month.”

Because Esquemas was almost finished by the time “Mamiii” came together, the label was forced to quickly adjust its plans in order to accommodate the single release. “The call to Sony was an interesting one. It was, ‘Hey, the plan is changing, don’t be mad at us,’” Tischker says. What could have been the biggest hurdle — getting clearance from Universal for Karol G’s appearance on a Becky G track being released by Sony — was resolved quickly, he adds. “We told them what we had, and, as with every label, they said: ‘Are we sure we’re going to get the clearance?’”

Tischker was very sure, as he had an excellent relationship with Assad going back to “Mayores,” the hit Becky G and Bad Bunny collaboration from 2017. “When I asked Noah if we’d have an issue with any of the labels, he said: ‘You have my word [that we won’t].’ And Noah’s word means everything.”

For scheduling and impact purposes, it was important for both artists that the song come out before Valentine’s Day, Karol G’s birthday. The two artists insisted that there be minimum buildup, limited to a single post on Becky G’s account on Feb. 8. Additionally, there was no music video to help promote it.

When it finally dropped, “Mamiii” was an immediate success, debuting at No. 1 on Hot Latin Songs, where it became Becky G’s first No. 1 on the tally and Karol G’s fourth.

Business-wise, says Jordan, “Everything is split right down the middle [between the two stars]. It’s a true collab, it’s a true partnership, and the labels, to their credit, worked it out really fast.”

This week, “Mamiii” notches its eight week at No. 1 on Hot Latin Songs, buoyed by the recently dropped music video (which, in a twist, features Mia Khalifa and Euphoria star Angus Cloud instead of the artists) and by Becky G’s guest appearance at Karol G’s Coachella performance.

Beyond that, “Mamiii” is that rare song that’s not only a musical hit, but also an event — one that was further fueled by the vast social chatter that surrounded Karol G and Anuel’s split, and conjecture that the lyrics of the song were somehow making reference to it. Regardless, it all provides massive fuel for the forthcoming release of Becky G’s Esquemas album.

“This is her best album to date, and the hard part was the timing and rejiggering the plan,” says Jordan. “But this record was such an event that the plan deserved to be rejiggered and everyone understood that. Songs are living, breathing things and sometimes alterations are required with great plans.”