Making its debut in 2023, the Harlem Festival of Culture (HFC) is inspired by the Oscar-winning concert film Summer of Soul and will be held annually at the same park where 1969’s original Harlem Cultural Festival took place. As the event’s creative director, Bivins will oversee ideation and strategy initiatives to build the brand long-term.

In announcing Bivins’ appointment, HFC co-founder and talent & technical producer Yvonne McNair said in a statement, “We are so excited to have someone like Michael Bivins on board as we start on this incredible journey. In addition to being a legendary artist and a brilliant businessman, Mike is a visionary and a creative force; his insight and experience will help us build out HFC as a cultural destination and a brand. Much like the original festival, artists’ voices will be a crucial part of the festival’s foundation and expansion as they will help us create a one-of-a-kind experience. We are also looking forward to fostering relationships with other artists and entertainers to be part of HFC. This is just the beginning.”

Bivins, chairman of his own firm Sportyrich Enterprises Inc., has worked extensively in the past with McNair, who is CEO of Captivate Marketing Group. He tells Billboard of his new role, “With my understanding of what Yvonne does with CMG and knowing how important the original Harlem Cultural Festival was to the community and to our culture, I knew I wanted to be part of it. Although I’m from Boston, I’ve always spent a lot of time there and have participated in the Entertainers Basketball Classic [EBC] at Rucker Park for years. My goal as creative director is to bring in that history and appreciation with an infusion of music and sports.”

The goal of the forthcoming documentary about New Edition’s Culture Tour is to further document the group’s legacy. Featuring all six members of New Edition along with fellow R&B icons Charlie Wilson and Jodeci, the 30-city tour wrapped April 10. Additional details about the documentary, now in post-production, will be announced at a later date. New Edition, which will celebrate its 40th anniversary in 2023, is also looking forward to doing a Las Vegas residency.

“It was an amazing feeling to see in the audience every night how our legacy has stood the test of time,” says Bivins of the tour. “[2017 biopic] The New Edition Story had characters portraying us. And although we played an important role in the movie’s success, we wanted to peel back another layer for #NE4lifers to see the real us. This story will be told through the lens of Brooke Payne [the group’s early manager, choreographer and mentor]. People will see behind the scenes on the production, rehearsals and live performances. This documentary is also something that the group can own as a unit.” 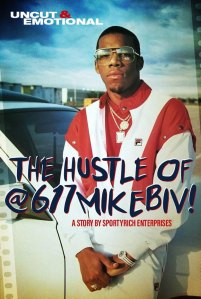 Bivins’ Sportyrich Enterprises is helming the documentary about his own life. The Hustle of @617MikeBiv, also in post-production, will chronicle his path as a co-founding member of New Edition and Bell Biv DeVoe (aka BBD) as well as his ventures as a label executive and entrepreneur. As the head of Biv 10 Records, he discovered Another Bad Creation and Grammy winners Boyz II Men, the latter of whom he signed through his label’s joint venture with Motown Records.

Sharing that watching The Black Godfather documentary about industry legend Clarence Avant motivated him to tell his own story, Bivins adds, “The Hustle of @617MikeBiv will focus on things I’ve seen and survived from. I’ve been in rooms others have never been in and seen things other people have never seen. The music business is very cutthroat. I want to give game to those who want to watch and hear real ish to help them stay 10 steps ahead at all times.”