Before Russia Invaded Ukraine, They Were Bitter Eurovision Rivals

Before Russia Invaded Ukraine, They Were Bitter Eurovision Rivals

On the battlefield, Ukraine and Russia are dealing with life-and-death issues as Vladimir Putin prosecutes a bloody war against Russia’s neighbor, his second invasion of Ukraine in the past decade. But on another, less violent stage, the two countries have been trading blows for the last 20 years: the Eurovision Song Contest.

Since Eurovision was created in 1956 with the idea of bringing the nations of Europe closer together after World War II, Russia has competed 23 times and Ukraine has participated 16 times. Ukraine has won twice, in 2004 with “Wild Dances” by Ruslana and 2016 with “1944” by Jamala. Russia has claimed victory once, in 2008, with “Believe” by Dima Bilan.

While European countries have different attitudes about Eurovision, Russia and Ukraine have taken the competition seriously and consistently placed among the top 10 over the past decade — only Sweden and Italy have done better, says Swedish television producer Christer Björkman. “Ukraine and Russia both contribute a lot to the contest, in terms of musical substance and originality in stage presentation,” he tells Billboard.

Ukraine puts “a lot of resources and effort into their participation and their performance,” says Björkman, who co-produced the 2017 contest in Ukraine with the European Broadcasting Union (EBU). While Sweden is in it to win, he notes, “Ukraine also wants to make a statement that they are good enough to belong.”

But when this year’s competition is held in Turin, Italy, on May 14, there won’t be another song battle between the two countries in the PaloOlimpico arena. Eurovision has expelled Russia from the contest, while Ukraine has indicated it will send the rap and folk group Kalush Orchestra to perform its entry, “Stefania” — even as the country is under attack.

Ukraine, amid a wave of global sympathy for its suffering — and without its familiar rival to contend with — is oddsmakers’ heavy favorite to win Eurovision this year, even though the Orchestra was not even Ukraine’s top choice.

The group was the runner-up in Ukraine’s national final to select their entry for Eurovision. The winner, Alina Pash with “Tini Zabutykh Predkiv,” pulled out after Ukraine’s national public broadcaster accused her of traveling to Crimea through Russia in 2015, a charge she denied. (It is illegal under Ukrainian law to travel to Crimea via Russia.) Pash provided authorities with proof of how she entered the region, but it was later revealed that someone on her team had submitted falsified documents. “I don’t want to be in this dirty story anymore,” Pash later said.

Being expelled from Eurovision this year is a blow to Russia’s cultural prestige. Ukraine feels the show must go on, as a sign that the country is unwilling to acquiesce to Russian aggression.

“The Eurovision arena is important and necessary for us,” says Ruslana, speaking with Billboard from a besieged Kyiv. “Ukraine must be seen, heard, understood, and felt as an important part of the modern world, as a unique European culture that the Russians are trying to destroy.”

While websites that report news about Eurovision ran stories saying that Yaroslava Simonova, a singer and pianist, would represent Russia in Eurovision 2022, no official announcement had been made before Russia invaded Ukraine on Feb. 24.

The next day, the EBU, which runs the contest, said that Russia was banned from the contest, citing “the rules of the event and the values of the EBU,” Martin Österdahl, executive supervisor of the Eurovision Song Contest, tells Billboard.

“The decision reflects concern that, in light of the unprecedented crisis in Ukraine, the inclusion of a Russian entry in this year’s contest would bring the competition into disrepute,” he says.

One day later, Russia suspended its membership in the EBU, saying in a statement that “broadcasters see Russia’s withdrawal from the competition as an ‘inappropriate political sacrifice’ in a music forum that has always emphasized its non-political status.”

In 1994, three years after the Soviet Union broke up, Russia participated in its first Eurovision, in Dublin, Ireland. It placed ninth with “Vechny Strannik” by Youddiph. The country did not earn another top 10 finish until 2000, when Alsou placed second with “Solo.”

“I wanted our artist Alsou to represent Russia at Eurovision because I was hoping it would help promote her new album in Europe,” says David Junk, an American music executive who was then President of Universal Music in Russia. “Access to 300 million television viewers across 24 countries – what a great opportunity. It was the first TV performance for this young 16-year-old girl. After a few poor placings, she brought prestige back to the country on an international stage.”

Ukraine’s first Eurovision entry was “Hasta La Vista” by Olexandr in 2003. He placed 14th. The following year, in only its second time in the contest, Ukraine won with Ruslana, who won with the title single from Wild Dances, an album she composed after an expedition to the Carpathian Mountains. Eurovision 2004 took place six months before the Orange Revolution, a civil disobedience and protest movement centered against elections later found to be marred by corruption and fraud.

“Wild Dances” spent 10 weeks at No. 1 in Belgium and also topped the Greek and Ukrainian charts. Ruslana’s album, with both Ukrainian and English editions, was certified five-times platinum in her native country. (The singer had already been signed to EMI in 2002.)

Bilan, the Russian winner in 2008, released an English-language album that year through Interscope. 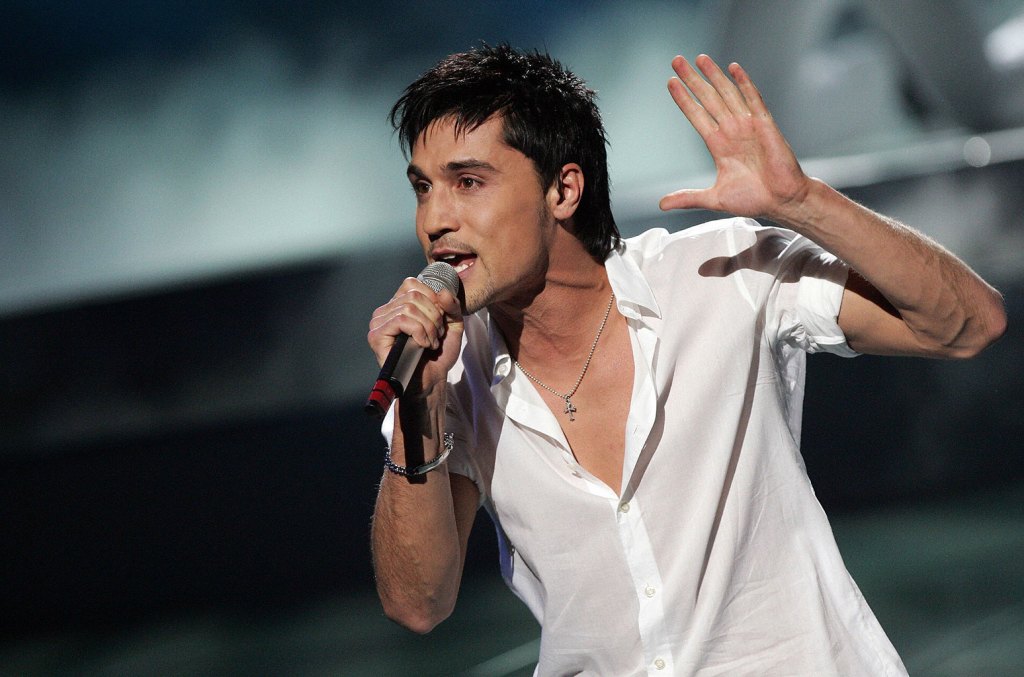 Dima Bilan of Russia performs during the final of the Eurovision Song Contest 2008 at Belgrade Arena on May 24, 2008.

In 2016, Ukraine became the first Eastern European country to win Eurovision twice, with a victory by Jamala’s “1944,” which recounted the mass deportation of Crimean Tatars ordered by Josef Stalin in 1944 on the grounds that they had allegedly collaborated with Nazi Germany during the war. (Some 40% of those deported died in the process.)

Russian officials claimed “1944” violated Eurovision rules against political content with its allusions to the 2014 Crimean crisis, when Russia invaded and annexed that region of Ukraine. The EBU disagreed and “1944” ultimately won the contest.

Following her win, Jamala released an album by the same name through Universal Music Denmark, with a U.S. release on the company’s Republic imprint. (All of her previous and subsequent albums were issued on independent Ukrainian labels.)

Jamala’s contested win was not the first Eurovision conflict between Ukraine and Russia. In 2007, Andriy Danylko, a singer- actor, was chosen to represent Ukraine in his drag persona, Verka Serduchka, with the song “Dancing Lasha Tumbai.” Some conservative elements in Ukraine protested that the country should not send a drag artist to Eurovision.

But the main controversy was over the song’s lyrics. The words “Lasha Tumbai” were challenged as sounding like “Russia Goodbye,” a reference to the Orange Revolution. Danylko denied the charge, contending the words were Mongolian for “churned butter,” which they were not.

The Ukrainian broadcaster did not ask for a change in lyrics and Verka Serduchka placed second in the contest, narrowly losing to Serbia’s Marija Šerifović with her song, “Molitva.”

Controversy erupted again in 2017 between Russia and Ukraine. Although there were calls for Russia to boycott the Ukraine-hosted 2017 contest over the ongoing conflict in eastern Ukraine, Russia announced the name of its entrant, singer-songwriter Yuliya Samoylova.

Soon after, Ukraine banned Samoylova from entering the country for three years because she violated a Ukrainian directive prohibiting travel to Crimea from Russia. The EBU asked the Ukrainian government to remove or defer her travel ban for the contest and suggested that Samoylova perform her song from a remote venue. Russian television turned down the offer, wanting Samoylova to perform in Kyiv with the other contestants.

Russia’s Channel One decided it would not broadcast the contest. That automatically meant Russia could not participate.

In 2019, pop singer Maruv won the Ukrainian national contest to determine who would represent the country at Eurovision. The contract with Ukraine’s television broadcaster required that she not perform concerts in Russia, improvise any lyrics or talk to journalists without the broadcaster’s permission. She refused the terms and withdrew from the competition. Ukraine’s second-place finisher in the national final refused to take her place, as did the third-place act. As a result, Ukraine did not participate in the 2019 competition, held in Tel Aviv.

From Eurovision Winner to National Heroine

Ruslana, Ukraine’s most-famous Eurovision winner, still recalls how important her 2004 triumph was to the country, which became independent of the Soviet Union in August of 1991.

“It seemed unreal,” she says. “Nobody in the world knew much about Ukraine then, although we were developing and becoming stronger… At that time, every victory in the international arena seemed like an incredible achievement and most people were not used to winning, so no one believed that I could win. This victory became a symbol of a new Ukraine – bold, cheerful, exotic.” 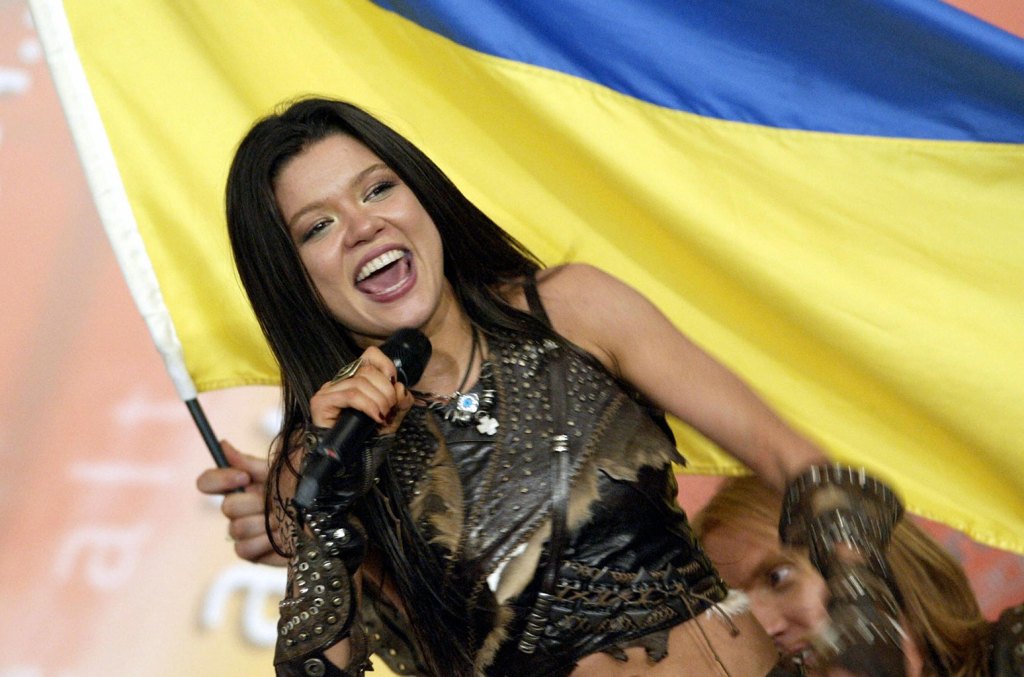 Ruslana Lyzichko of Ukraine sings “Wild Dance” her winning song after the press conference following the 49th Eurovision song Contest in Istanbul May 15, 2004.

There was little antagonism between the Russian and Ukrainian delegations that year, she says. “They mocked us, but we did not yet feel open humiliation,” Ruslana says. “Our competition was with Zeljko Joksimovic, who represented Serbia and Montenegro as one state.” Even though Ukraine and Serbia-Montenegro were competing for the win, the two countries hosted a party together, which outdrew all other events happening the same night.

“No one could believe that the two implacable competitors and favorites were making a joint friendly session,” Ruslana says. “This is how music turns battle into friendship; this is how music makes the world a better place.”

Ruslana became a political activist – addressing large crowds in the Orange Revolution and supporting Victor Yushchenko in the disputed presidential elections – and went on to serve in Ukraine’s Parliament, and later to be a celebrated human rights campaigner.

She never stopped being a musical artist. Before Russia invaded Ukraine on Feb. 24, Ruslana had started writing a song called “I’m Alive.” Two weeks into the war, she finished it, “and sang it with an incredible heartache in my soul and pain for Ukraine and every Ukrainian,” she says. (The song’s video, with images from the current conflict, was posted to YouTube on March 7.)

“As I hear music, I cry because music releases the feelings that are growing deep inside. This song is our memory of those who are no longer with us, and faith in those who are saving the world from darkness and cruelty.” 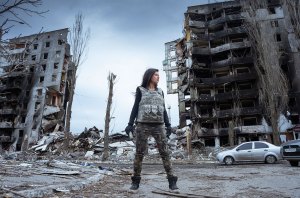 Before Russia Invaded Ukraine, They Were Bitter Eurovision Rivals On the battlefield, Ukraine and Russia are dealing with life-and-death issues as Vladimir Putin prosecutes a bloody war against Russia’s neighbor, his second invasion of Ukraine in the past decade. But on another, less violent stage, the two countries have been trading blows for the last 20…