Planet Drum to Return With First Album in 15 Years: Exclusive

Planet Drum to Return With First Album in 15 Years: Exclusive

The new album will be preceded by the group’s first live show in 15 years on May 1 at Frost Amphitheater in Palo Alto, Calif. Two more shows are on the schedule, timed to the album’s release, for Aug. 5-6 at the Capitol Theater in Port Chester, N.Y. 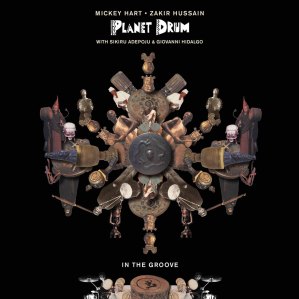 Planet Drum ‘In The Groove’

Hart and his colleagues began working on the album during the pandemic after Hart’s touring schedule with Dead and Company screeched to a halt.

“I thought there was a great need for this,” Hart said of drumming’s restorative nature in a statement. “Rhythmic unity among cultures is what Planet Drum is about, and with the world in torment, it sends a powerful message of healing.”

Hussain calls the project a “groove album. Very little virtuoso soloing, but four of us in sync within the groove adds up to something incredible.”

The musicians initially recorded separately, but as the pandemic eased, they were able to gather in person, with part of the joyous, mystical recording process captured in the below video that includes new and archival footage.

“All rhythm is the same, jazz, blues,” says Adepoju. “The music speaks one music.” But as the clip shows, the four musicians all come from very different backgrounds and philosophies, but are united by their love for percussion and the restorative power of music.

“What’s happened here in America is we’ve lost the groove,” Hart says over footage of police in riot gear. “All the other forces, war, famine, all those things have rhythmic causes. The planet is out of rhythm. I think by getting back in rhythm we may be able to save this earth.”

Planet Drum to Return With First Album in 15 Years: Exclusive Planet Drum, the Grammy-winning, all-star collective led by the Grateful Dead’s Mickey Hart and world music artists Zakir Hussain, Giovanni Hildalgo and Sikiru Adepoju, will return with their first album in 15 years on Aug. 5. In the Groove follows 1991’s self-titled release, which spent…