Inside Track: Dance Music Looks to Find Its Footing — and Some Respect — at IMS Ibiza

Inside Track: Dance Music Looks to Find Its Footing — and Some Respect — at IMS Ibiza

The earliest opening weekend in the history of Ibiza began not with a kick drum beckoning crowds to a darkened dance floor, but with hundreds of members of the electronic music industry converging on the island during daylight hours to discuss the state of the scene.

The occasion was IMS Ibiza, a dance industry conference that’s been happening on the island since 2007. Returning to the live format after two virtual events during the pandemic, the robust three-day event, which took place April 27–29, explored topics ranging from the blockchain to anxiety management.

But the essential question was how the electronic scene continues growing, monetizing, self-actualizing and legitimizing in the context of both the wider music industry and governments and policymakers who still often view music’s most nocturnal sector with suspicion, despite the genre’s massive growth over the last decade.

“I don’t think we need to justify the music to people anymore. Calvin Harris is one of the most successful musicians on the planet and my mum would recognize that, and so would the chairman of Sony,” IMS co-founder Ben Turner said in a Thursday afternoon discussion. “On a consumer level, I think we’re there, but actually, weirdly, on the music industry level and government level, we’re still way behind that thinking.”

Happening at Destino Pacha Ibiza Resort, an assemblage of low-slung whitewashed rooms and villas on a verdant seaside cliff, IMS hosted representatives from entities including YouTube, Beatport, BBC Radio 1, the Association for Electronic Music, TikTok, SheSaid.So and the United Nations — along with an array of Web3 entrepreneurs and assorted artists, promoters, publicists, activists and more.

In many cases, the easiest way to demonstrate build respect was by demonstrating substantial revenue. In the Wednesday afternoon presentation of the annual IMS Business Report, London-based analyst David Boyle announced the global electronic music industry’s value in 2021 was $6 billion, bouncing back up 71% from 2020, when the valuation dropped to a 10-year low due to the pandemic. (This number is determined by revenue from clubs and festivals, DJ and artist earnings, music sales and streaming, software and hardware and education platforms.) And while Boyle noted that dance/electronic music makes up a relatively humble 3.3% of total market share of recorded music volume in the United States, the scene’s metrics are still catching the eye of high-profile platforms.

Data analysis platform [MIDiA Research] “was approximating that electronic is between 9% and 11% of [global] music streaming, which is significant,” Dan Chalmers, director of YouTube Music in Europe/Middle East and Africa, told Billboard during IMS. “If you look at that as a percentage of the IFPI Global Music Report, which cites $16.9 billion in streaming, you’re looking at somewhere between $1.5 and $2 billion worth of streaming [for electronic music]. That doesn’t even count remixes… So [the genre] is highly significant and highly influential, and that’s the reason we wanted to come down and partner more closely with IMS.” 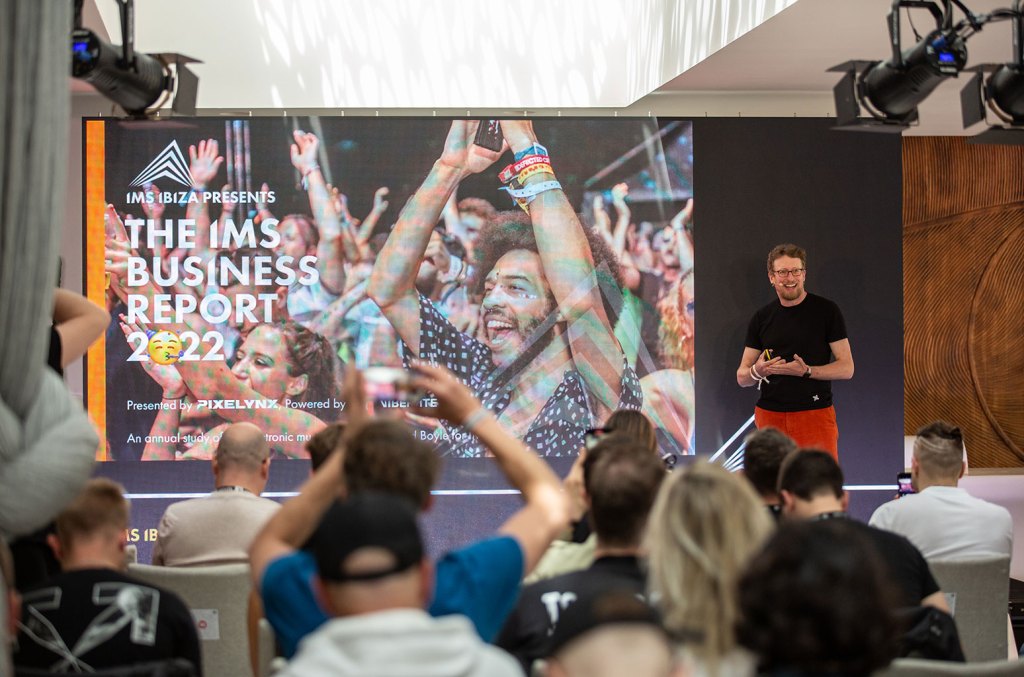 A talk by members of the Association for Electronic Music (AFEM) touched on legitimizing the scene in the eyes of governments and the wider music industry. Members pointed to a lack of respect for computer-made music among old school industry members, stereotypes around the scene’s connection with drug use and a general lack of awareness about the depth and breadth of the genre leading to misperceptions about dance culture

This subject has taken on crucial relevance following pandemic club closures that hit independently owned venues particularly hard, creating what for many felt like an existential threat to the soul of the scene itself.

“Maybe it’s never really going to happen in expecting governments to care about us culturally,” said Silvia Montello, who was appointed CEO of AFEM last month. “They should care about us because of our community value, but the thing that will always resonate with them is just giving them those cold, hard numbers. They go, ‘Oh hang on a minute, $7.5 billion worldwide, well that’s actually a proper industry. This isn’t just some people skirting around and putting parties on and getting wasted in a field.”

Chalmers brought 80 members of the global YouTube music team for a group incubator on the island, which included private panels and culminated in a dinner at the recently opened and massively posh Six Senses resort on the island’s sylvan north side. Here, the YouTube team mingled with the conference’s upper crust as the streamer’s global head of music, Lyor Cohen, held court during a multicourse dinner of oysters, steak and chocolate ganache served in an elegant dining room with sweeping views of the Mediterranean. It was a memorable exercise in relationship building, which Cohen spoke of in other contexts earlier in the day during a discussion with dance pioneer and IMS co-founder Pete Tong.

“We recognize the fact that the music industry in general is very complicated, especially around rights,” Cohen said, teasing a new venture from YouTube concerning copyright identification and royalties — a massively complicated issue in dance, and one that Apple Music and Spotify have tackled in the past year. “We spent an enormous amount of money to build a Content ID facility in Zurich. We’re world class, to demonstrate to the music industry and the rest of the creative arts community how much we respect copyright and how much we respect creation.”

In his talk, Cohen noted that he’s never signed an artist who didn’t have a photo of their mother displayed in their house and shared how during his tenure at Warner Music Group, he once flew from a wedding in Florence, Italy, to Bergen, Norway, to try and sign a then-upcoming artist named Kygo. He ended up hiking with Kygo’s father while still wearing the tux he’d had on at the wedding. (Cohen was ultimately outbid, with the producer signing to Sony Music Entertainment after receiving a $30 million offer.)

For every industry legend roaming Destino’s grounds, there were a dozen upstart entrepreneurs, many of them focused on Web3, the metaverse, NFTs and the much-hyped monetization opportunities therein. PIXELYNX, a Web3 platform focused on music’s crossover with gaming, had a significant presence at IMS including a filmed presentation from two of the company’s founders, Richie Hawtin and deadmau5.

“Web3 screams liberation from the societal norms that we know,” deadmau5 noted during his talk. “Now I don’t have to kind of be bummed out there’s a multi-billion-dollar company and the artist is getting a fraction of a cent per hundred plays.”

“The only way we’re going to grow the music industry is thinking about music as more than just music,” PIXELYNX CEO Inder Phull told Billboard. “It has to be viewed as content that will touch on storytelling, so let’s bring in people from the film world. It will have interactivity, so let’s bring gaming experts in… AI experts in. All of a sudden we’re making music, but we actually have people from multiple sectors coming together. I think that’s going to be the key driver of growth, to get out of the box of thinking of music as just music.”

Indeed, during the IMS Report, Boyle noted that gaming is more than 20 times the size of the electronic music industry, (the report predicted the gaming industry will earn $400 billion in revenue by 2025.) “Gaming has really cracked monetization in a lot of ways,” Phull adds. ”I think the music industry can learn a lot from that.”

While dance’s big bet on Web3 was emphasized by all of Thursday’s programming in the main gathering space dedicated to the topic, the conference – whose 2022 theme was “In Pursuit of Purpose” — also focused on the health and well-being of those who operate in this world and the world at large.

A Destino villa filled with fresh flowers hosted three days of meditation, yoga classes and other sessions related to wellness and mental health, which remains a significant topic after Avicii’s suicide in 2018 and the industry’s penchant for burnout. Here, entertainment lawyer Kurosh Nasseri spoke about having a heart attack at IMS 2019 (he collapsed on the venue’s tennis court and was given CPR, then rushed to a local hospital) and how the experience made him reconsider the productivity-over-everything, “machismo” approach that drives many in a 24-hour industry.

Elsewhere, in a keynote speech, Beatport CEO Robb McDaniels pledged $100,000 to any idea that would increase gender equality in the male-dominated industry — which DJ hardware and software manufacturers including Pioneer and Ableton estimate at 1.5 million professional, semi-professional and serious hobbyist DJs globally. “When I joined Beatport at the end of 2017, I was shocked to learn that about 95% of customers in the DJ community were male,” McDaniels noted. “That just didn’t make sense to me, and while it may be a deep-rooted sociological issue, it’s also a business one that, if solved, results in a meaningful expansion of our market and a big opportunity for our community.” (All ideas on the topic can be sent to robb@beatport.com for consideration.) 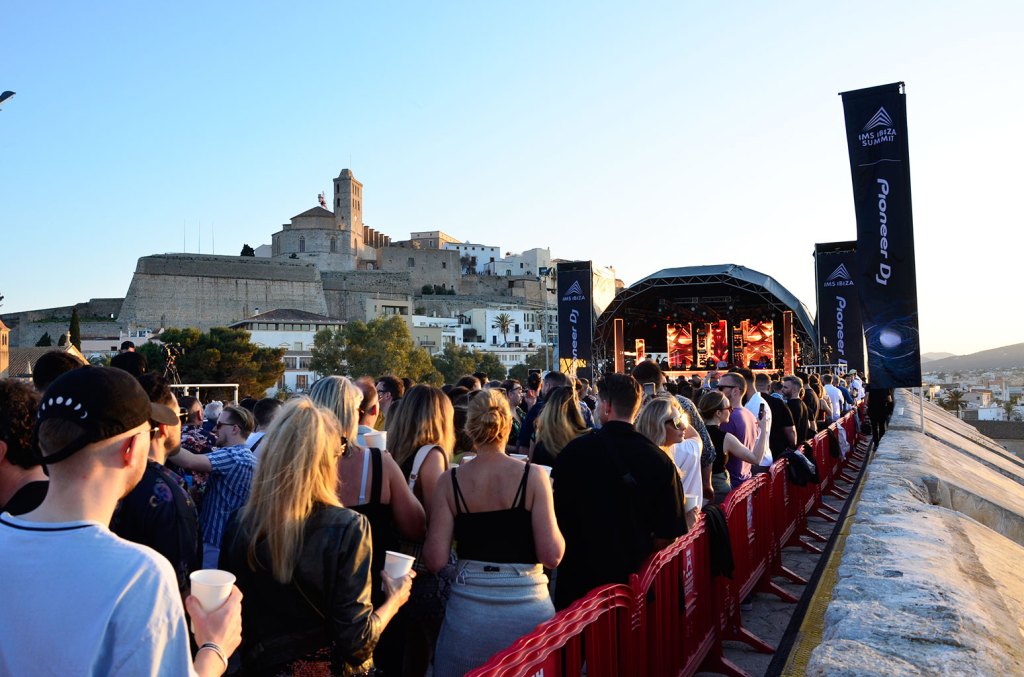 Throughout the conference, discussions emphasized that the dance scene doesn’t exist in a vacuum and is instead part of a larger music industry and global ecosystem. Dance’s responsibility to this ecosystem was explored during a talk by Brian Eno, who joined by video to reduce his carbon footprint and spoke about how the carbon footprint of the audience for live tours is “one of the biggest issues in the music industry.” After this talk, the audience and representatives from the UN workshopped ideas for reducing the scene’s carbon emissions, while critiquing DJs who use carbon-spewing private jets and adding non-optional carbon offset fees to ticket prices floated as ideas.

Ultimately, of course, IMS ended with a dance, as the conference hosted Friday night sets from Jamie Jones and The Blessed Madonna and a Saturday showcase from Defected Records at Ibiza’s Dalt Villa, a stunning UNESCO World Heritage Site, where the oldest fortifications date back to the fifth century.

As Ibiza finally thumped back to life over the weekend, with thousands of fans descending on clubs so packed that one could barely navigate through them, IMS demonstrated both the complexity of the scene in terms of revenue, policy, tech and social responsibility. But it was also clear that, ultimately, none of this would matter if not for the very old impulse of just letting it all go on the dance floor.

Inside Track: Dance Music Looks to Find Its Footing — and Some Respect — at IMS Ibiza The earliest opening weekend in the history of Ibiza began not with a kick drum beckoning crowds to a darkened dance floor, but with hundreds of members of the electronic music industry converging on the island during daylight hours…

Previous Post
PSY Embraces his ‘Second Chapter’ With New Album, Executive Role & Friendship With BTS
May 3, 2022
Next Post
Tim McGraw Says His Mom Encouraged Him To Move To Nashville After Dropping Out Of College
May 3, 2022