While plenty of celebrities turned heads at the 2022 Met Gala Monday night (May 2), one person managed to capture the attention of the Internet — because people thought he was actor-musician Jared Leto.

The enigmatic red-carpet-goer was in fact a fashionisto and LGBTQ+ activist from Sweden named Fredrik Robertsson, who was described by Vogue in a 2019 article as a “fabulous mystery man.” Robertsson describes himself on his Instagram page as a “creative dictator” and “fashion addict.”

Taking the red carpet at the Met Gala by storm, Robertsson was dressed in an intricate, spine-filled haute couture gown designed by Iris Van Herpen, while also sporting some spherical eye makeup and a slicked-back hairdo. “Wearing this unique haute couture look by @irisvanherpen created just for me. Attending the MET Gala,” he wrote in an Instagram post, adding a comment that the Internet seemed to agree with: “I can’t believe this is me.”

In another interview with Vogue in 2019, Robertsson described his approach to dressing himself, saying that he isn’t particularly interested in getting attention with his couture garb. “I just happen to love fashion and have always liked the idea that what I wear changes how people look at and think of me,” he said. 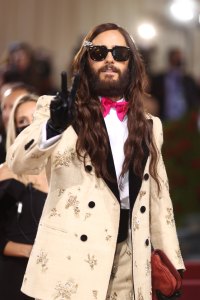 Jared Leto at The 2022 Met Gala celebrating In America: An Anthology of Fashion held at the The Metropolitan Museum of Art on May 2, 2022 in New York City.

30 Seconds to Mars frontman Leto, meanwhile, did make an appearance at the annual event, walking the red carpet later in the evening with yet another doppelgänger — Gucci designer Alessandro Michele. Both men dressed in identical gold suits complemented with red bow ties.

The Internet, naturally, had a field day with the ongoing confusion over who Robertsson was. Check out just a few of our favorite tweets about the kerfuffle below, as well as Robertsson’s posts about the evening:

If they leave this up for long enough, this man legally becomes Jared Leto https://t.co/bdcwtiJAys

Loving the chaotic visual of Jared Leto dressed as a twin with Alessandro and being told by a panicked PR person that there’s actually another man who also appears to be his twin so people think he’s already there pic.twitter.com/aqoUtLNWCP

Spot the real Jared Leto.
Is it A, B, C or D? pic.twitter.com/npLV5jT0Pq

this man jared leto thought the gilded age was in 2007 with this homage to the windows media player. #MetGala pic.twitter.com/vYVTqBr4Pn

Jared Leto Was At the 2022 Met Gala — But the ‘Fabulous Mystery Man’ Wasn’t Him While plenty of celebrities turned heads at the 2022 Met Gala Monday night (May 2), one person managed to capture the attention of the Internet — because people thought he was actor-musician Jared Leto. The enigmatic red-carpet-goer was in fact…