Kim Kardashian shut down the Met Gala red carpet Monday (May 2) in one of Marilyn Monroe’s most iconic dresses, a gold beaded body hugger Monroe wore when she sexily sang happy birthday to President John F. Kennedy 60 years ago.

Kardashian had to lose 16 pounds to fit into the dress, designed by Jean Louis and purchased in 2016 by the Ripley’s Believe or Not! museum in Orlando, Florida, for a whopping $4.81 million.

“It was such a challenge,” she said. “I was determined to fit it.”

The dress originally cost $12,000. It was so tight Monroe had to be sewn into it when she purred “Happy birthday, Mr. president” on May 19, 1962, at a Madison Square Garden fundraiser. She died three months later. It has been known as the “Happy Birthday, Mr. President” dress ever since. 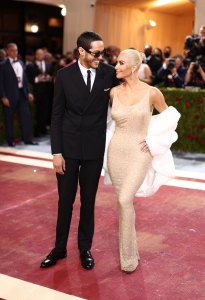 Kim Kardashian and Pete Davidson at The 2022 Met Gala celebrating In America: An Anthology of Fashion held at the The Metropolitan Museum of Art on May 2, 2022 in New York City.

The celebration of American design was themed to gilded glamour, sprouting classic black tuxedoes for many of the men and lots of dresses in black and white for the women. Others paid literal homage to New York City and still more shimmered in metallic golds and silver.

It’s been just under eight months since the last gala, an annual fundraiser that raises eight-figure sums for the Met’s Costume Institute. Pre-pandemic, about 600 A-listers from fashion, sports, music, film, TV, technology and beyond were invited. This year and last, the numbers were closer to 400. The 2020 gala was canceled.

More than $16.4 million was raised last year. The starry event is the institute’s primary budget feeder.

This year’s gala coincides with the opening of the second part of a two-part exhibit at the Costume Institute focused on American fashion and style. The evening’s dress code is gilded glamour and white tie, a la the Gilded Age, that tumultuous period between the Civil War and the turn of the 20th century known for its robber barons, drama and grandeur.

Previous Post
Nicki Minaj Is Bejeweled in a Burberry Baseball Cap at 2022 Met Gala: See Photos
May 3, 2022
Next Post
Lady Gaga Soars With ‘Hold My Hand’ From ‘Top Gun: Maverick’ Soundtrack
May 3, 2022