Fourteen years ago, when Jason Felts was hired by Sir Richard Branson and helped create the Virgin Produced film and TV production arm, the first question he asked his new boss was, what was the one dream he wanted to accomplish.

“So it was extremely special for me to be standing on the tarmac several months ago when he went up to space and returned on Virgin Galactic,” says Felts. “Since I had [privately] made the decision that I was going to step away from the entertainment business and essentially retire from the entertainment industry after 25 years, it felt like a fantastic bookend to an amazing journey.”

Felts sat down exclusively with Billboard to announce his early retirement at age 45 and detail his future plans.

How did you start at Virgin?

I was running a company called J2TV with Justin Berfield, who played Reese on Malcolm in the Middle at the time. We had a show called Sons of Tucson that was on Fox and we brought on the writing and directing team from Malcolm in the Middle. We also introduced Kourtney Kardashian and her family to the E Network. We had produced a TV show called Filthy Rich: Cattle Drive. It was very City Slickers –celebrities’ kids driving cattle. That show just got rebooted and was the highest rated new series for E. It’s called Relatively Famous: Ranch Rules, so full circle. I found myself down on Necker Island with Richard Branson and the Branson family and Richard and Justin and I crafted a business plan to create a company that would bring the Virgin brand back to its roots in the entertainment industry. It had started with Virgin Records 50 years ago in 1976. It would also be a cohesive tie to a lot of the Virgin branded products and service companies. Using entertainment as a medium allowed us to build a very innovative content company that was focused on branding and multimedia marketing, both short form as in commercials and advertising and longform, for television and film. That’s how Virgin Produced was born, around the dinner table on Necker Island in 2008.

Did that end your J2TV company as you and Justin became part of Virgin?

The J2 assets were rolled into Virgin Produced and in 2009, I became the CEO of Virgin Produced, and was the youngest CEO in Virgin [at age 32], which was both exciting and challenging all at the same time. I had a lot of responsibility. We started with Justin and me and one other person and grew the business very quickly to 72 employees in two offices. We also launched a company in India called Virgin Produced India and produced Bollywood language films. We remade Insurgent, which was a big Summit film. 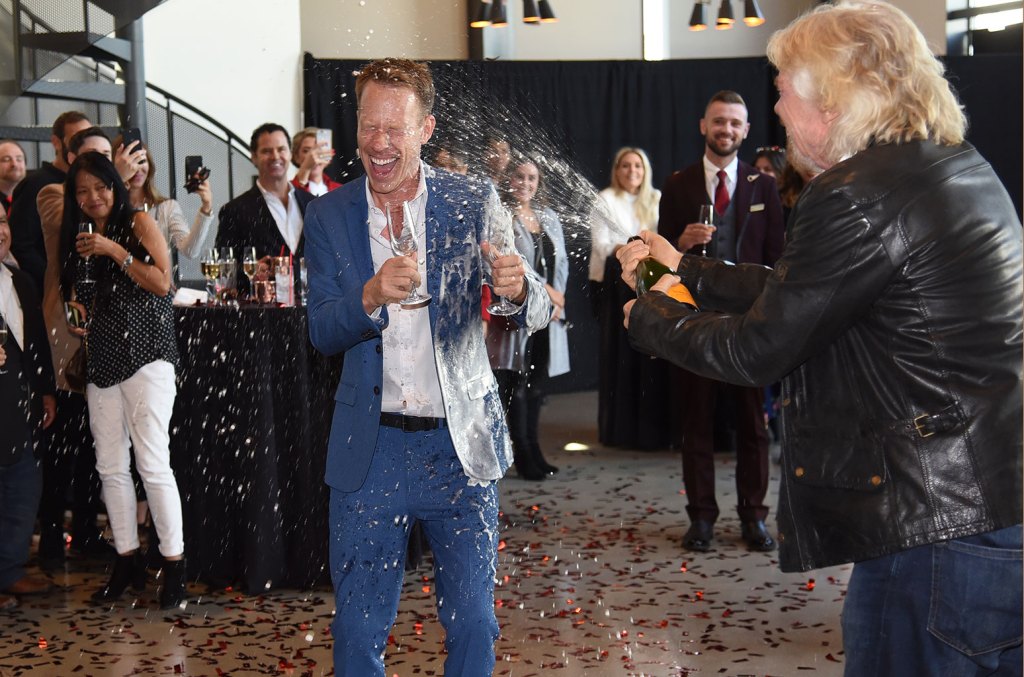 Branson isn’t the only person going to space. When did you decide to register for a fight on Virgin Galactic?

I signed up to go to space when I joined the Virgin family. I’ve been signed up for a while now, but I’m very excited for Virgin Galactic and the team at Virgin in their pursuit to get space tourism launched.

Do you know where you are on the waiting list?

Very, very far away. There’s a lot of people ahead of me.

What were your responsibilities at Virgin Produced?

My responsibilities were first and foremost to produce content that was reflective of the Virgin brand and also to be a cohesive tie to other Virgin branded companies within the family and find ways to elevate their content. That included the creation of the Virgin America safety video, which we were fortunate enough to break a lot of ground with and won many Cleo and ad agency awards. I also oversaw a team that was responsible for the development and the packaging and the production of short and longform content. I would also oversee the corresponding marketing campaigns for those projects, including our first movie Limitless.The film went on to gross over $161 million at the box office and we created amazing campaigns around that. That led us to coproducing and innovatively marketing Bad Moms and Movie 43 and 21 And Over and Immortals and The Impossible and That Awkward Moment and the Steve Jobs movie, Jobs. The company’s success was closely followed by an acquisition by a Denver-based private equity firm called Madison. Madison through Virgin Produced further invested in several music festival brands including Kaaboo and Virgin Fest.

Has the Virgin Fest not taken place because of Covid?

Virgin Fest was shut down by the government due to Covid restrictions.

If it happens post-COVID, it will be after your retirement.

You’re only 45. Why are you retiring?

It was an incredibly fun and challenging journey, but for me, it’s an end of an era. It was rewarding and it was adventurous, which you would expect out of a journey with one of the most revered lifestyle brands in the world. I’m really grateful for Richard’s trust and mentorship, and friendship. I’m thankful to have been able to journey on with Justin, my friend, and work with him and so many talented individuals over the last years. But the time was right and I’m ready to go and have a little fun. 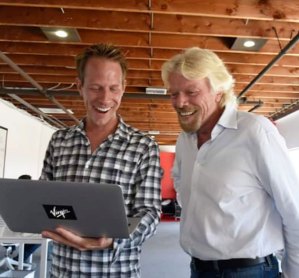 What will that mean?

That means an extensive amount of traveling and I’ve secured a publishing deal for a book. I’m going to give a little peek behind the curtain of what I feel is one of the most revered brands in the world and some of my experiences. I started in the entertainment industry 25 years ago as an intern with Michael Ovitz and then one of my first jobs in Hollywood was working for the Mirisch film family and then I produced commercials for several years and then I formed the company J2TV with Justin. I’ve had an extremely rewarding and challenging journey and I’ve enjoyed every second of it, but I want to travel. I also want to spend as much time as possible with my parents and my family. COVID taught me you only get one opportunity in life to do that. I quarantined with my family. I pulled all of my brothers and their partners and/or spouses and my parents out of their respective homes and put us all under one roof in Palm Springs for all of quarantine. Every night we played games. We had every meal together, breakfast, lunch and dinner. It was like we were back with mom and dad and it was the most rewarding and exciting time. I enjoyed every single opportunity [with my family] and that was the revelation that enough is enough.

Did you ever envision that you would retire so early?

From day one, I never believed I could work for anybody. I’m a born and bred entrepreneur and I’m a self-starter and so I never believed that I would ever fit into a big conglomerate or a big corporate infrastructure. I always knew my path would be an entrepreneur, but Virgin was an incredible fit for me because it’s an entrepreneurially minded brand. Because I reported directly to Richard Branson, it allowed me an opportunity to run a business and produce incredible content and experiences and marketing campaigns without restraint.

Are you done with the entertainment industry?

I’m done with the entertainment industry, but I will continue to do selective consulting around brand positioning and brand strategy for new emerging and existing brands if I believe in their values. I won’t just be traveling and spending time with family and selectively consulting on brand positioning and strategy but I will also be focusing on my non profit work including the non profit I confounded – the onePULSE Foundation, created with the owner of the Pulse nightclub in Orlando after the shooting tragedy in 2016.

What are some of the highlights of your tenure at Virgin?

We launched the company on the Santa Monica Airport tarmac in front of a camera with Richard Branson and our team. The highlights would include the release of our first film Limitless, which came screaming out of the gate and did incredibly well and we built the marketing campaign behind that and we coproduced that movie. The creation of the Virgin America safety video, which we created completely in-house. John Chu directed it and we broke a lot of ground with the “Safety Dance” video. We won a lot of awards and from there, it would be creating the Virgin Produced channel, which was a content channel on all the Virgin planes, in hotels rooms and airport terminals and was a captive audience channel. Creating Virgin Produced India. Working directly with Richard Branson on cool and unique opportunities. We had him on Shark Tank and Entourage. We got him his star on the Hollywood Walk of Fame We had a lot of fun and will continue to as friends. I was on the Obama Entertainment Council and Richard was my plus one date for several White House events and we had a lot of fun with that. We both went to the White House for the first time and as we were going back to the hotel I said, “I have to admit I stole something from the White House,” and he goes, “What?” and says, “Me too,” and at the same time we opened up our blazers and pulled out White House napkins. And then working with Justin Berfield. You know, we formed this company called J2 and it evolved into Virgin Produced and to be able to work with your best friend every single day was fun. He’s now gone off and is married and is a father and is focused on building his family. It’s been a great journey.

How did you let Richard know you were retiring?

I mentioned it after he came off the spaceship. The next day I gave him a gift, which was a big Virgin Galactic blanket. It says Astronaut 001. I told him I’ve had a lot of fun at Virgin, but I’m exploring. He’s always been about life/work balance and I said I might decide to live a little bit more. So I planted the seed then and then I officially let him know recently.

What was his reaction?

His reaction was incredibly encouraging, which is exactly what you expect from Richard Branson. He was extremely effusive and appreciative of all the contributions and value that I brought to the brand. As you may well remember, Virgin America had just sort of launched when I launched Virgin Produced and so the Virgin brand didn’t have significant presence in the U.S. It had 100 per cent awareness in the U.K., 90 per cent plus in Australia, but it was around the 70 or 80 per cent awareness level in the U.S. and so Virgin America and Virgin Produced worked hand-in-hand to build that awareness in the U.S. Now you’ve got Virgin Voyages which is fantastic and they’ve got the torch and they’re running full bore. You’ve got Virgin Galactic and Virgin Hotels. Virgin Produced and Virgin America came up together and I think he was really appreciative that we elevated their profile from a media perspective.

After speaking with Felts, Billboard reached out to Branson to ask him about his CEO’s retirement. Branson responded: “While there is much success to celebrate over the last decade plus at our content companies, all good things often come to an end. I’m appreciative of Jason’s contributions to the brand’s growth in North America, his unwavering passion, people leadership and all the entertainment initiatives he, Justin and the team achieved. Jason is a good friend, and I look forward to seeing him work less and play more.”

Virgin Produced CEO Jason Felts Announces Retirement at 45: ‘It’s Been a Great Journey’ Fourteen years ago, when Jason Felts was hired by Sir Richard Branson and helped create the Virgin Produced film and TV production arm, the first question he asked his new boss was, what was the one dream he wanted to accomplish. Branson…