After four long years since she put out her debut album, Hayley Kiyoko is finally back and ready to release her sophomore full-length. Now, in a new interview, she’s explaining what’s changed in the time since she exploded onto the scene.

On Tuesday (June 7), Kiyoko was unveiled as one of the three new cover stars of the latest issue of Teen Vogue, alongside Jack Harlow and Saucy Santana. In her wide-ranging interview, Kiyoko spoke candidly about putting out new music after having such a stellar breakthrough with 2018’s Expectations.

“This album [Panorama, due out July 29] is filled with self-failure and heartbreak and finding love and fighting to keep it and all of these things I have yet to share,” she said. “Panorama is me trying to own where I’m at.”

Part of that ownership came with being open about her relationship with former Bachelor contestant Becca Tilley, who Kiyoko has been dating in private for the last four years. When she released her new song “For the Girls” back in May, the star shared a Bachelorette-themed music video in which she confirmed her relationship with Tilley.

“It is one thing to discover your authentic truth, but to share it takes a lot of courage, as we all know,” Kiyoko said of the pair’s relationship. “She has had to navigate a lot of hardship in her journey, and I’ve been honored to be by her side through it all. It is not my place to speak for her, but it does feel amazing to get to share the love I have for her with the rest of the world.” 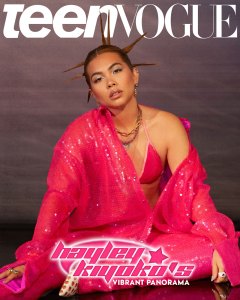 Kiyoko also spoke to the fact that much of her previous work has focused on her past and coming to terms with the various aspects of herself, including her sexuality, race, body image, and much more. Over the last few years, the star said that she’s finally “caught up” with her past, and is ready to focus on what moving forward looks like. That, for her, meant creating lyrics and songs that felt freer than any of her earlier work, which also meant writing music that everyone could get into.

“I had this epiphany that, lyrically, I was still holding back and hiding how I truly felt. No one was ever going to know what I was actually saying, in fear of someone finding my journal, or someone thinking that I was a flaming lesbian,” she said. “I’m Hayley, and I’m a lesbian, and I’m here for the queers. But I’m also here for everyone else.”

Hayley Kiyoko Shares How Girlfriend Becca Tilley Helped Her Discover Her ‘Authentic Truth’ After four long years since she put out her debut album, Hayley Kiyoko is finally back and ready to release her sophomore full-length. Now, in a new interview, she’s explaining what’s changed in the time since she exploded onto the scene. On…