How Much Does Spotify’s Artist Development Really Help?

How Much Does Spotify’s Artist Development Really Help?

Since Mia Berrin’s New York-based indie-rock band Pom Pom Squad was inducted into Spotify’s Fresh Finds artist development program last October, the singer-songwriter has hit career milestones she never thought she’d enjoy so early in her career. Those have included a recording session at the legendary Electric Lady Studios, placements on some of music’s most sought-after playlists and a billboard in Times Square, to name a few — all sponsored by the streaming service.

“I sort of viewed all those things…as further down the line in your career things,” says Berrin. “To have those experiences so soon because of this specific thing … it definitely felt like a boost.”

Since launching in May 2021, the Fresh Finds program – an extension of the playlist hub of the same name – has provided developing artists with a raft of opportunities. In addition to recording an exclusive original song at Electric Lady Studios under the Spotify Singles banner (with a producer of their choice) and being featured on a Times Square billboard promoting the artists and the program, acts receive credits for Spotify for Artists’ paid on-platform promotional resources like Marquee and are offered other forms of marketing support both on- and off-platform. They and their managers also enjoy “masterclasses” with Spotify executives, during which they receive tips on how best to navigate their careers within the Spotify ecosystem; these executives remain available to provide additional guidance in the weeks and months that follow.

“Getting to actually be in the room with people from Spotify made it feel a lot less intimidating,” says Berrin, “because I think the music industry sort of becomes this big, scary, amorphous blob in in a lot of musicians’ heads.”

Spotify Is Embracing a New Financial Metric. Can Investors?

Importantly, the Fresh Finds program guarantees participating artists a spot on the titular playlist, which has nearly 900,000 followers and helps serve as a launching pad for independent artists on the platform and beyond, as well as the genre-specific Fresh Finds playlists, the Spotify Singles playlist and other relevant playlists across Spotify. While artists and labels typically pitch upcoming, unreleased songs to Spotify’s playlist editors using the faceless Spotify for Artists portal, this access provides the relationships to bypass this system and overcome a major hurdle to achieving visibility on the platform.

Spotify built its success as a platform for music discovery, long touting its support of emerging and independent artists, in efforts to set itself apart from its competitors and foster goodwill with the creator community. In 2015, the company launched Found Them First, a microsite that gave users bragging rights by allowing them to see which future stars they regularly listened to on the platform prior to their ascent; users who participated were also serviced personalized playlists of current emerging acts to further boost discovery. This was followed by the Fresh Finds playlists in 2016, and, more controversially, Discovery Mode in 2020, which allows artists and labels to receive higher priority in Spotify’s personalization algorithms in exchange for a lower royalty rate (that program has been the subject of scrutiny by members of Congress and has received a mixed response from the music community).

Spotify isn’t the only streaming service angling to boost up-and-coming artists, which in turn establishes the platform’s relevance, builds early relationships with the acts and drives their fans to the service. In 2017, Apple Music launched its own artist spotlight program, Up Next, which elevates an emerging act each month by providing editorial and promotional opportunities and has since gone global. In 2018, SoundCloud introduced First on SoundCloud to showcase emerging artists on the platform; since last year, SoundCloud has also been making direct investments in each artist by producing “career-making firsts” including “dream collab” projects, merch drops and cover art, among other perks. Absent concrete stats, how much these programs actually help developing artists’ careers has never been entirely clear. But according to data provided by Spotify, the Fresh Finds program has been proven to boost streaming and, anecdotally, grow longer-term career opportunities.

Looking at Spotify’s last Fresh Finds class of artists, which included Pom Pom Squad, indie-pop duo TOLEDO, alt-pop singer-songwriter Araya and Doss — who declined to participate in this story — the acts all received double or triple-digit streaming gains after the program launched. Between Sept. 12 (one month before they joined Fresh Finds) and the week of Nov. 14, Araya’s monthly listeners grew 227% to more than 201,000, Pom Pom Squad’s grew 189% to more than 287,000 and TOLEDO’s grew 24% to over 503,000. 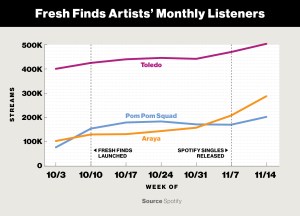 Growth in first-time listeners was even more pronounced for all three artists. Between Sept. 12 and the week of Nov. 14, total growth on this metric was 718% for Pom Pom Squad, 385% for Araya and 76% for TOLEDO. 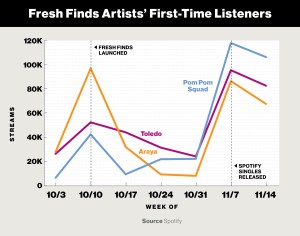 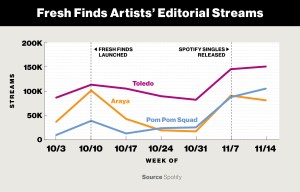 Over the length of the program, streams peaked most dramatically in the week following the announcement of the new Fresh Finds class on Oct. 12 – a week that included the unveiling of the Times Square billboard, which ran from Oct. 12-14 and Oct. 16-18 – as well as the two weeks following the release of the Spotify Singles, which dropped on the platform Nov. 11 and were amplified with on-platform promotion as well as paid social/digital marketing through Nov. 19.

“On the marketing side, this is our main way that we are helping independent artists grow their careers in the long term,” says Spotify senior music marketing manager Rachel Ring. She adds that artists are chosen using “a combination of data and editorial decision making with our curation team,” who select artists who are “showing momentum on and off Spotify.”

Fresh Finds may be designed to boost artists in the long term, but Spotify wouldn’t provide streaming data for any of these acts past the duration of the campaign. That makes it difficult to ascertain how enduring the impact of the program is on-platform beyond publicly available streaming data on the Spotify app. For what it’s worth, all three artists’ streaming activity is significantly down from where it was in mid-November. Seven months later, Araya’s monthly listenership sits at 66,506; Pom Pom Squad’s is 175,779; and TOLEDO’s is at 419,230. On the brighter side, Pom Pom Squad’s monthly listenership is still up 72% from where it was the week before the Fresh Finds campaign launched, while TOLEDO’s is up a smaller 5%. Araya’s, meanwhile, is down 13% from the week before the program’s launch.

Regardless of where their Spotify streaming numbers stand now, Fresh Finds at the very least provides a window of opportunity for artists and their teams to capitalize on the not-insignificant marketing support Spotify provides during that time. This opportunity can perhaps best be seen in the impressive jumps in first-time listener numbers for all three artists, which indicate Fresh Finds’ ability to provide wider exposure to a potential new crop of fans.

There is of course more to a music career than just streaming. While it can be difficult to draw a direct line between Fresh Finds and off-platform successes, participating artists have seen growth in other areas following their induction into the program. Pom Pom Squad, which is signed to Berlin-based indie label City Slang, enjoyed an increase in college gigs as the band’s profile has grown, “and a good portion of the profile growth is due to Fresh Finds,” says the band’s manager, MidCitizen Entertainment owner Reid Martin.

TOLEDO — who recently signed a label deal with Grand Jury Music — has also enjoyed a touring bump since joining Fresh Finds, with the duo embarking on its first-ever tours this year supporting Shout Out Louds in May and Wilderado in July. Nicole White at Brilliant Corners Artist Management says Spotify’s “significant” marketing efforts around TOLEDO’s Spotify Single “Beach Coma” are to thank for that. “[That] helped with exposure and has contributed to opportunities that have come about since, especially with touring,” she says.

White also notes that TOLEDO’s Instagram following has grown “about 10%” since Spotify announced their participation in Fresh Finds in mid-October. “[That] feels significant, especially since we haven’t released any new material since ‘Beach Coma,’” she says, adding that the band’s Instagram follower growth has also increased “at a slightly faster rate” in the last six months compared to the period before they joined Fresh Finds, from an average of 2.9 followers per day prior to 3.4 followers per day afterward.

“A lot of people won’t bite on something unless they see the social proof that other people are publicly backing it,” says Toby Bird, who manages Araya. For the Brooklyn-based singer-songwriter, that’s resulted in more touring offers, press requests and greater interest from labels and publishers. Even if Fresh Finds wasn’t specifically mentioned, Bird says, “I do really think that that was instrumental to getting some of those larger looks.”

While the Fresh Finds program is just a year old, Ring notes that it’s merely the streaming service’s latest iteration of longstanding support for independent artists. “We’ve kind of always been doing this work,” she says, “but now we just want to be more vocal about putting independent artists and songwriters and producers at the forefront of our marketing on the same equitable stage as some of the biggest superstars in the world.”

Araya, who Spotify claims was the most-streamed artist on the flagship Fresh Finds playlist in 2021, says that he’s noticed an increase in interest from the public since his induction into Fresh Finds, but that the growth “still feels extremely organic, which is something that I care a lot about.” While Araya says he “used to be scared” to look at his streaming numbers, the program also gave him a new perspective on metrics: “I have these numerical goals, and it doesn’t feel ego-related.”

On Apr. 27, Spotify announced the third batch of Fresh Finds artists — Delaney Bailey, Jhariah, Carter Faith and Alemeda — and is also looking at partnerships to expand the program in the future. The company also recently launched a Fresh Finds spinoff in the TikTok series Unfinished Finds, through which Spotify works with eight artists at a time to highlight their unreleased tracks on the video-sharing platform.

Pom Pom Squad, Araya and TOLEDO have all graduated out of Fresh Finds, but the hope, at least, is that alumni can use the momentum gained from the experience to further their careers down the line. Says Ring, “[We’re] structuring this work around allowing them to learn, create and grow their audience in the long term.”

How Much Does Spotify’s Artist Development Really Help? Since Mia Berrin’s New York-based indie-rock band Pom Pom Squad was inducted into Spotify’s Fresh Finds artist development program last October, the singer-songwriter has hit career milestones she never thought she’d enjoy so early in her career. Those have included a recording session at the legendary Electric Lady…