Tupac Shakur would have turned 51 years old this Thursday (June 16). But a celebration of the late rapper-activist’s life, career and influential legacy actually kicked off earlier this year on Jan. 21. That’s when the “Tupac Shakur. Wake Me When I’m Free” exhibit opened its doors at L.A. Live across the street from the Grammy Museum. 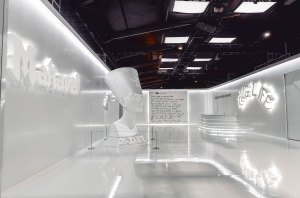 The influences that helped shape Shakur in his formative years are compellingly portrayed in the next room. A tall statue of a raised Black fist — its pedestal wrapped in a stars and stripes design surrounded by piles of handcuffs — commands center stage in the next room. It’s flanked on one wall by a letter written by Shakur’s activist mother and former Black Panther Party member Afeni Shakur (who died in 1996) from prison in Jan. 1970 titled “We Will Win.” News articles and posters about the Black Panthers cover the opposite wall complemented by Black liberation and Black Power flags hanging above.

Jeremy Hodges, an advertising/marketing veteran and founder of Project Art Collective, designed the show. Shakur’s “unapologetic messaging and music are relevant, influential, and reflective of the hard lives led by many,” says Hodges, who has collaborated with Drake and Lady Gaga, among others. “His music earned attention and respect, considered by many to be one of the biggest influences on modern hip-hop. I am honored to be a part of telling his story in an interactive, immersive format, and help spread his message even further.” 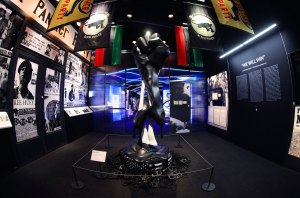 Supplementing the immersive experience are headphones with remotes that activate the various installations so visitors can hear the accompanying music and commentary as they spend time at each display. Among other exhibit highlights is a hallway showcasing Shakur’s various outfits, including the Versace suit the six-time Grammy Award nominee wore to the 1996 ceremony, and the striking depiction of a red rose rising out of the concrete.

In between are stationed colorful tidbits such as a handwritten haiku penned by an 11-year-old Shakur: “A dream is lovely/ You drift to another land  I dream in the night” complete with a drawing of himself in bed. There’s also a 1983 playbill touting a production of A Raisin in the Sun at the Apollo Theater in Harlem, New York featuring a 12-year-old Shakur portraying the role of young son Travis — foretelling the artist’s later segue into theatrical films like Juice and Poetic Justice.

Nwaka Onwusa curated “Wake Me When I’m Free.” While serving as curator of L.A.’s Grammy Museum, she collaborated with Afeni Shakur to present the original incarnation of the exhibit — “All Eyez on Me: The Writings of Tupac Shakur” — at the venue in 2015.

Now chief curator at the Rock & Roll Hall of Fame, Onwusa tells Billboard, “To celebrate while educating audiences on the significance of Tupac Shakur could not have been done without looking at his mother, Afeni Shakur. Behind every strong man is a woman. They [Tupac and Afeni] were both ‘hell raisers’ in their own unique ways, and this exhibit is impactful for Tupac fans and music enthusiasts alike. This immersive experience has helped humanize such a timeless icon.”

Earlier this week, the Shakur Estate announced the launch of the artist’s Powamekka Café in Los Angeles. In partnership with Fixins Soul Kitchen at L.A. Live — also across the street from the “Wake Me When I’m Free” exhibit — the café will be open for a limited engagement between June 16-30. The café stems from a down-home Southern restaurant concept that Shakur visualized many years ago: a comfortable gathering spot for family and friends with a menu he created that includes meatloaf, gumbo and his cousin Jamala’s fried chicken wings. The first Powamekka Café opened in 2018 for a limited time in New York’s Lower East Side, taking over John Seymour and Nas’ Sweet Chick restaurant on Ludlow Street.

For tickets and more information about “Tupac Shakur. Wake Me When I’m Free,” visit https://www.wakemewhenimfree.com.