Held at Los Angeles’ famous Hollywood Bowl, starring an all-Black symphony orchestra (The Re-Collective Orchestra) performing live for the first time in the venue’s 100-year history — Juneteenth: A Global Celebration for Freedom was an incredible, modern day celebration of the annual holiday. Juneteenth (June 19) is the commemoration of the end of slavery in the U.S., which became formally recognized as a federal holiday by President Joe Biden in 2021.

Juneteenth: A Global Celebration for Freedom drew in an enthusiastic audience. Thomas Wilkins and Derrick Hodge conducted the impeccable Re-Collective Orchestra, with musical direction by Adam Blackstone and Questlove. Gospel songstress Yolanda Adams opened the special event with a moving performance of the Black National Anthem, “Lift Every Voice and Sing.” Music stars including Chaka Khan, The Roots and Mickey Guyton were among those to wow fans. The celebration of freedom also ended on a spiritual note, with a gospel medley performance by Michelle Williams, Anthony Hamilton and sister duo Mary Mary.

Miles Brown was joined by his own dad, Jack Brown, as the pair introduced six-time Grammy-winning group Earth, Wind & Fire and acknowledged Father’s Day, which was also celebrated on Sunday. “I ain’t gonna lie, y’all are gonna wanna stand up for this one,” Miles said teasing the crowd. “… Today is Juneteenth but we couldn’t let the day go by without wishing a happy Father’s Day to all the amazing fathers out there.”

“Earth, Wind & Fire —these are three words that have become synonymous with good music, good vibes and overall funk,” the actor went on. “Now with over 90 million records sold worldwide, they’ve been spreading their uplifting message of hope, love and respect for over 50 years and they’re here tonight to do what they do best.” 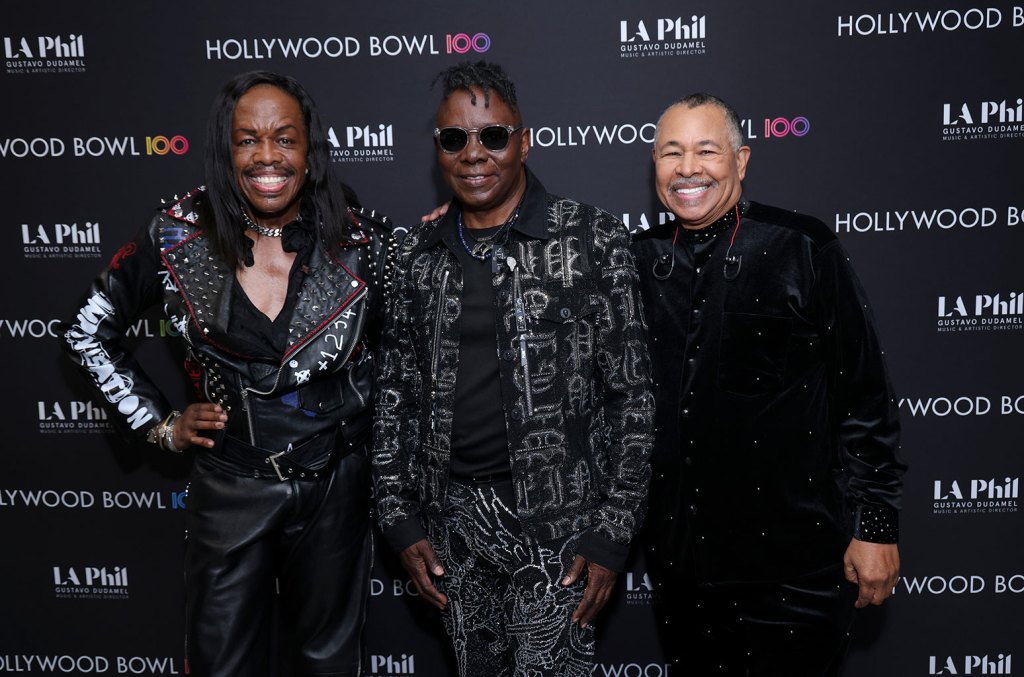 Dubbed “one of the greatest bands of all time” by Miles, Earth, Wind & Fire and the Re-Collective Orchestra began their performance with their top 40 Billboard Hot 100 hit “Fantasy,” which peaked at No. 32 and charted for 15 weeks in 1978.

The crowd appeared excited as Earth, Wind & Fire transitioned to deliver their No. 3 Hot 100 track “Let’s Groove.” The tune was followed up by “September,” to which fans — included Debbie Allen — danced the night away.

Comedian Leslie Jones appeared thrilled to introduce the iconic trio ahead of the performance, saying, “What’s up Hollywood Bowl? Black people in the Hollywood Bowl. This next group that I’m bringing out, I’ve loved them since they came out.”

She quipped, “I’m not saying they’re the reason that I got back knees, but I was smacking it up, bringing it down! And let me tell you, I knew I was gonna marry Ronnie DeVoe.” 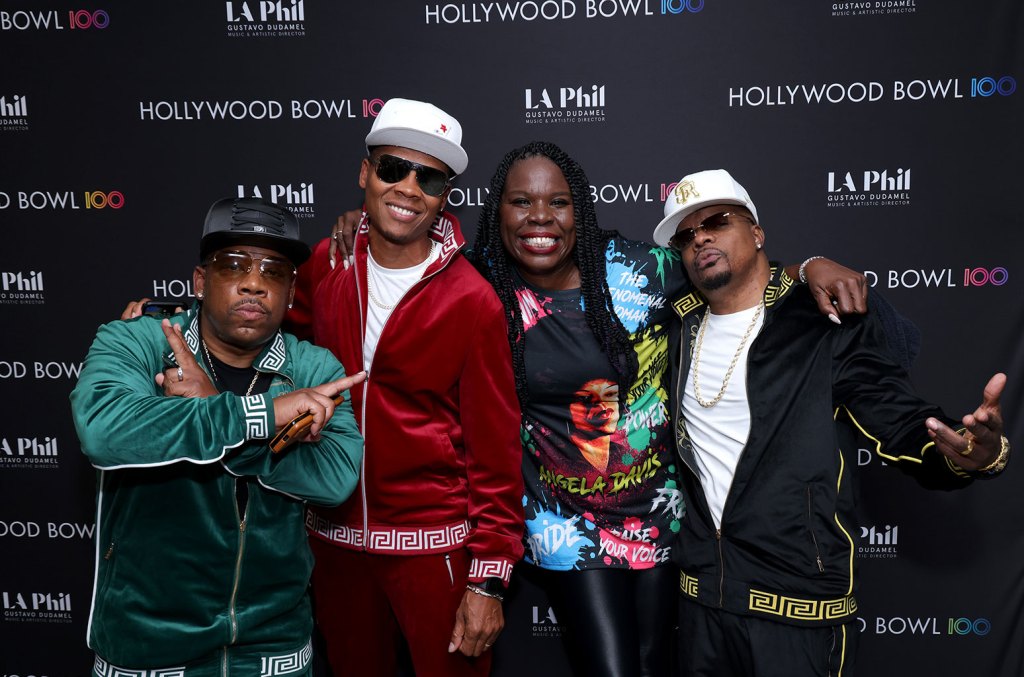 Bell Biv DeVoe’s musical offerings included a special presentation of their all-time fan-favorites “I Thought It Was Me” and “Poison.” The trio, composed of Ricky Bell, Michael Bivins and Ronnie DeVoe sported jumpsuits for the show-stopping performance which left the live audience standing, dancing and singling along.

“Anybody know the words?” NE-YO asked the audience, which prompted them to sing along to the lyrics, “She got her own thing/ That’s why I love her/ Miss Independent/ Won’t you come and spend a little time?” NE-YO’S four background dancers briefly exited the stage as he began the second song of his R&B set, “Because of You.” “Get up out your seats and everybody clap your hands!” he told the crowd before belting the No. 2 Hot 100 smash record. NE-YO followed the two love songs with his pop single “Give Me Everything” — the tune was his second No. 1 Hot 100 bop. “Thank you for rocking with me!” he said in conclusion.

Grammy-nominated country star Mickey Guyton honored the late Marvin Gaye by covering his emotional tune “What’s Goin On.” She also delivered her own tune “Black Like Me.” The single was a top 30 hit on the Adult Contemporary chart, ranking No. 27 last April.

Guyton was proud to represent country music on Juneteenth, writing on Instagram, “What a beautiful celebration! Such an honor to be a part of #Juneteenth a Global Celebration for Freedom with @questlove @theroots and the incredible Re-Collective Orchestra. Country music also looks like this.”

Michelle Williams, Mary, Mary and Anthony Hamilton bring praise and worship to the city of angels

“Can’t Give Up Now” was the opening song of choice for Mary Mary, the sister gospel duo that lit up the stage after being introduced by Insecure actor Kendrick Sampson. Sampson delivered a hearty speech before the dynamic performances, saying, “Juneteenth has a special place in my heart, it’s my favorite holiday,” Sampson said, before adding, “And y’all know gospel music has always been an empowering and driving force in the fight for freedom. The Black church often provided a safe haven in organizing for our liberation. This holiday is a reminder that we don’t stop until no one is left in bondage.”

“This year, Juneteenth falls on Sunday, so y’all know we gotta take it to church,” he joked before urging the crowd to get on their feet for the gospel medley set.

Hamilton performed after Mary Mary, singing “Something About the Name Jesus” with an array of background vocalists. He closed his powerful live rendition of the track saying “God bless you” to the Hollywood Bowl guests. That’s when Destiny’s Child alum Michelle Williams chimed in, saying, “Happy Juneteenth everybody! Get up out your seats.” Williams then kicked off the upbeat, gospel hit “Say Yes,” a cover by Williams featuring Kelly Rowland and Beyoncé. The track earned the No. 1 spot on Billboard’s Hot Gospel Songs chart in 2014. 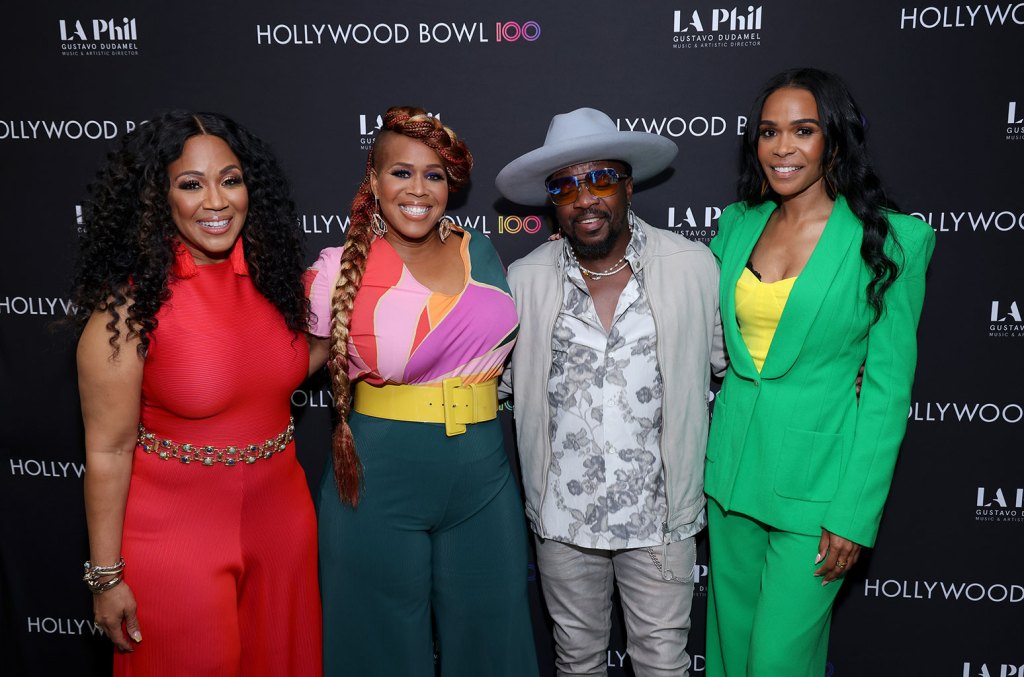