How ODESZA Is Selling Out Their Most Ambitious Concert Tour Yet

How ODESZA Is Selling Out Their Most Ambitious Concert Tour Yet

It was shortly after ODESZA finished its new album that the duo began remaking it entirely.

Having spent more than a year working in their Seattle studio, Harrison Mills and Clayton Knight were eager to hit the road with their new project, The Last Goodbye, out July 22 on Ninja Tune and their own Foreign Family Collective label. But first, the pair had to complete a task unique to electronic artists: reassembling the full-length for the stage.

“You basically write another album,” Knight says of preparing for ODESZA’s upcoming tour, “because you’re adapting all the music to the live setting, blending old songs with new, remixing little aspects. It’s a full-on project.”

Mills and Knight have avoided straightforward DJ sets since launching ODESZA 10 years ago. Their performances have become increasingly complex and now feature live instrumentalists, cinematic visuals, a lot of fireworks and reimagined versions of their emotional yet highly danceable soundscapes.

Their last tour alone, in support of Grammy-nominated third album A Moment Apart, involved six semitrucks, four tour buses, a string section and a six-person drumline. It grossed $9.1 million and sold 198,000 tickets across 35 shows in 2018 and 2019, according to figures reported to Billboard Boxscore.

Now, with its fourth album complete, ODESZA is poised to present its most lofty live show to date during a 27-date North American run, launching July 29 with three sold-out hometown shows at the 17,459-seat Climate Pledge Arena. The duo has been running and jumping rope to get in shape for the shows, all of which will feature longer bills (support acts include Sylvan Esso and San Holo) and installations to create a minifestival vibe. The remainder of the tour will hit mostly amphitheaters, venues that — outside of Colorado’s Red Rocks, a standard stop for A-list dance producers — have never been the domain of electronic acts.

“To our knowledge, no electronic artist has really done it,” ODESZA’s longtime manager, Adam Foley, of Red Light says of the amphitheater shows. “We felt like we could crack that door open, because we’re not your typical electronic act.” 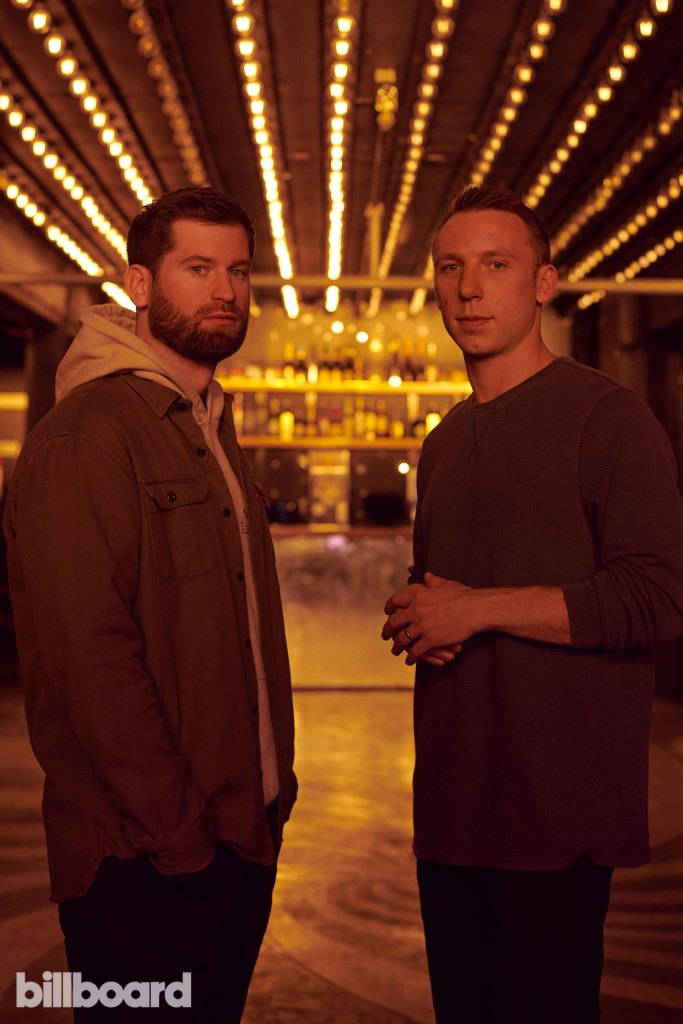 Harrison Mills (left) and Clayton Knight of ODESZA photographed on June 9, 2022 at Supernova in Seattle.

ODESZA has found traction in places beyond the clubs and the electronic charts. A Moment Apart debuted at No. 3 on the Billboard 200 in 2017, spending 10 weeks on the chart, while the album tour included a main-stage Coachella performance and mostly 5,000-plus-capacity spaces. And ODESZA did it all without a radio hit. While album single “Across the Room” featuring Leon Bridges hit No. 6 on Adult Alternative Airplay, the duo hasn’t clocked a Hot 100 crossover smash like some peers.

“There has been no radio,” says Foley. Indeed, much of the act’s output is too experimental for top 40, with the music often eschewing structural standards for songs that are rooted in electronic production — but are also fairly indie or even pop. Adds Mills: “Probably the weirdest thing about all this is that we don’t really know where we fit either. We often have to explain who we are.”

In that sense, the duo hopes the new tour is clarifying. Working with ODESZA’s agent, Jay Moss of Wasserman, Foley began routing the run shortly after the last tour ended in 2019, giving consideration to the handful of amphitheaters the act had played during the trek. Before Mills and Knight even began working on the new album, Foley and Moss put holds on amphitheaters — most with capacities between 15,000 and 20,000 — across the United States and Canada. They held on to these dates through the pandemic, while the duo was in the studio enjoying a more spacious production schedule than it has typically experienced, ultimately delivering a cathartic album featuring samples culled from crate digging and the members’ own childhood home videos.

When the tour went up for presale in April, Foley was nervous, particularly when considering midweek shows in smaller markets. From his office in Jackson Hole, Wyo., he sat on Zoom to track progress with ODESZA’s agent and management, along with various promoters and ticketing teams.

“We started with the East Coast,” Foley recalls, “and it was like, ‘Is this an anomaly that Atlanta [sold] really fast?’ Then it was like, ‘Chicago did, too.’ It wasn’t one or two markets, it was across the country.”

By the end of the day, the tour was 80% sold — a remarkable feat given the act has been quiet, releasing a collaborative album with Australian producer Golden Features under the name Bronson in 2020 but going dormant as ODESZA nearly three years ago.

Mills and Knight are tight-lipped about what they’re assembling for the tour, assuring only that the set will include visuals by longtime live director Luke Tanaka and creative director Sean Kusanagi. They estimate the outing will require 11 semitrucks and a crew of 100, and let it slip that the drumline is returning.

“The fact that people seemed as excited as we were was extremely overwhelming,” says Mills. “I didn’t even know if we were relevant anymore.”

This story originally appeared in the June 25, 2022, issue of Billboard.

How ODESZA Is Selling Out Their Most Ambitious Concert Tour Yet It was shortly after ODESZA finished its new album that the duo began remaking it entirely. Having spent more than a year working in their Seattle studio, Harrison Mills and Clayton Knight were eager to hit the road with their new project, The Last Goodbye,…