Those who came of age in the 1960s and 1970s know that rock pioneer Stephen Stills helped define the sound of the Woodstock generation. What they may not know is the depth and breadth of his 58-year musical career. A new, multifaceted partnership with Irving Azoff’s Iconic Artists Group assets management firm aims to burnish that legacy with the 77-year-old singer-songwriter’s current fans and attract new ones by getting his songs and albums on the playlists of the streaming set.

The deal includes IAG’s purchase of a controlling interest in Stills’ intellectual property, including his music publishing catalog of 1,000-plus songs from his stints in Buffalo Springfield; Crosby, Stills, Nash & Young (CSNY); Crosby, Stills & Nash (CSN); Manassas; The Rides and The Stills-Young Band, as well as his solo career. Among the classics the deal covers are “Suite: Judy Blue Eyes,” “Southern Cross” and “Love the One You’re With.” Additionally, IAG has acquired Stills’ recorded-music assets from his solo work, his interests in the aforementioned groups and an interest in Stills’ band trademarks, as well as his name, image and likeness.

Sitting with Stills in the spacious, tree-lined backyard of the artist’s Hollywood Hills home, Azoff says that not only have Stills’ musical contributions left an indelible imprint on American culture, they’ve had “a huge personal impact on me” — as have all of IAG’s roster: California artists Azoff “grew up loving, and people that I worked with and became friends with.” Even Cole — a pioneer of Los Angeles’ Central Avenue jazz scene before he became a Capitol Records signature artist — qualifies as such, though Azoff says, “I didn’t know him.”

Azoff and Stills’ friendship spans over 50 years. They met when Azoff, now 74, was a young upstart at Geffen-Roberts, the Sunset Boulevard management company run by David Geffen and Elliot Roberts, who handled, among other acts, CSN.

“I was the young kid in the office, and Stephen was the big rock star roaming the halls,” Azoff recalls. Their relationship deepened when he was put in charge of booking Stills’ first arena tour as a solo artist in 1975.

Stills says he doesn’t remember that initial meeting, but he certainly remembers as they booked the 1975 tour that Geffen told him to meet with Chicago promoter Frank Fried to describe the tour so they could figure out how much to charge. “In those days, the guarantees were ten grand, 15 grand, 20 grand,” Azoff jumps in. “So, the first show I booked was in Chicago at the Chicago Stadium and it was Triangle Productions/Frank Fried Presents. I charged him $50,000 and he paid it after having this meeting [with Stills]. That’s why David wanted him to talk to him, because he was the guy we figured we could get to pay the most.” 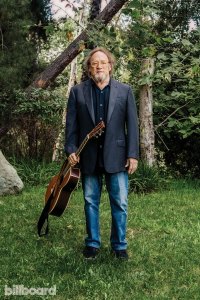 The pair laugh as they fall into an easy rapport, trading stories from those days: Stills recalling Geffen telling CSN&Y “don’t go to that stupid thing in the farmyard,” meaning Woodstock, in what turned out to be their second gig together in 1969, or the multiple splits and reconciliations CSN and CSN&Y endured. “They taught the Eagles how to break up,” Azoff jokes, referencing the band he has managed for decades. “The Eagles, all they wanted to do was be better than us. And they did so in every category, particularly business. Nobody ever got inside the Eagles circle,” Stills says. “We were prey to every grifter on Sunset Boulevard.”

The trusting, collaborative relationship that Stills and Azoff built over the decades—they remained friends even when they were no longer working together– was a determining factor when Stills decided to sell his catalog. Other buyers were interested, but “I waited for an Irving, someone that I knew and knew would cherish it,” he says. “I got another contract from another company, and it was jail.”

Azoff adds, “He actually got offered more money [elsewhere]. This is about a partnership and growing it forward.”

Stills, who has seven children, says the time was also right to plan for the future: “I got to these advanced years, and I decided I would circumvent the estate fight.”

“You look at [the Petty girls] and some of that,” Azoff says, referring to the infighting between Tom Petty’s wife and his two daughters following his death. “But in our case, what we’re trying to help is for the proper estate planning, but also growing it.”

Stills owned his compositions aside from a handful of Buffalo Springfield songs (like the protest classic — and the band’s only hit — “For What It’s Worth”) that will revert to him at the end of this year. With the IAG move, he has shifted administration of his catalog from Wixen Music Publishing to Universal Music Publishing Group and his music rights management from BMI to Azoff’s Global Music Rights. And while Warner Music Group owns the masters to CSN and CSNY releases, the bands’ members own their unreleased music, and Stills owns the master recordings of a significant amount of his unreleased solo material.

Asked what he wants out of his partnership with IAG, Stills replies: “A profit.” He’s half-kidding, but Azoff is dead serious when he talks about promoting and marketing Stills’ work better. “Nobody has focused on him for years and years,” he says. “Buffalo Springfield; Crosby, Stills, Nash; Crosby, Stills, Nash & Young; Manassas; and Stephen Stills — I mean, he has had more than five careers.”

Stills and IAG are already teeing up projects that will appeal to longtime fans and expose new generations to his music. First is a previously unreleased live album captured from two shows at California’s Berkeley Community Theater in 1971 to support Stills’ sophomore solo album, Stephen Stills 2.

“We were deep-diving in my vault and we discovered this thing,” says Stills. “We thought, ‘This is sloppy but great.’ I couldn’t hit those notes with a cattle prod these days.” The release is expected later this year on a label yet to be named. (Stills hints that the vault is “full of tapes” still to be explored.) Also planned: an expanded 50th-anniversary version of Manassas’ self-titled 1972 double album, a lineup that featured former Byrds member Chris Hillman, former Flying Burrito Brothers member Al Perkins and Dallas Taylor, studio drummer for Young and CSN.

Azoff adds that people are also “circling” potential CSN and CSNY film projects. While Graham Nash and Neil Young have both fallen out with Crosby, Stills says he remains on good terms with all three. When Azoff asks him how long it has been since he has spoken to Crosby, Stills replies, “Not that long. Same with Graham. And Neil, I can get on the phone any time. Neil’s my son’s godfather.” He adds, “they’re great guys and we had a great career as long as we didn’t spend too much time in close proximity.”

There is also potential for a documentary on Stills, who was one of rock’s most compelling and tempestuous artists of the ’60s, ’70s and ’80s. “Stephen, separate from the band, is a story that has to be told,” Azoff says. And what stories there are: At the 1969 Big Sur Festival in California, Stills was famously captured on film trading punches with a heckler in the crowd. He is the only member of the Rock & Roll Hall of Fame to be inducted twice in one night, he unsuccessfully auditioned for The Monkees, and Jimi Hendrix, Ringo Starr and Eric Clapton played on his debut solo album. He’s playing bass on Clapton’s “Let It Rain,” guitar on Bill Withers’ “Ain’t No Sunshine” and percussion on the Bee Gees’ “You Should Be Dancing.” In addition to his rock success, his blues supergroup with Kenny Wayne Shepherd, The Rides, took two albums to the top of Billboard’s Blues Albums chart.

That so much of his backstory remains widely unknown was “all part of a carefully devised plan,” Stills says with a smirk. “We’re going to change that,” says Azoff.

Stephen Stills Sells Catalog to Irving Azoff’s Iconic Artists Group in Expansive Deal Those who came of age in the 1960s and 1970s know that rock pioneer Stephen Stills helped define the sound of the Woodstock generation. What they may not know is the depth and breadth of his 58-year musical career. A new, multifaceted partnership…