Ashanti Douglas was set to become an Olympic athlete, but her life ended up going in a different direction. A standout runner on her Glen Cove, N.Y., high school team, she was scouted by the Olympics and later earned track scholarships to both Hampton and Princeton universities. But Ashanti ultimately took home the gold — and multiplatinum awards — when her dream to pursue music prevailed.

Growing up on Long Island, Ashanti attended dance classes and participated in talent shows at a dance school owned by “momager” Tina Douglas. But Douglas first noticed her daughter’s exceptional voice at home, where Ashanti would belt out Mary J. Blige while doing chores. Douglas began sending tapes to labels, and in 1994, Ashanti signed her first deal with Jive Records when she was 14 years old; she moved to Noontime/Epic four years later.

After graduating from high school, “I moved to Atlanta and ended up majoring in my first album,” says the now 41-year-old Grammy Award-winning artist. In 2002, Ashanti — who is celebrating the 20th anniversary of that self-titled debut — found mainstream success with Murder Inc. Records, where she composed hooks for some of the label’s rappers and sang on fan-favorite singles like Ja Rule’s No. 1 Billboard Hot 100 hit “Always On Time” (2001) and Fat Joe’s No. 2 Hot 100 smash “What’s Luv?” (2002).

Ashanti debuted at No. 1 on the Billboard 200 with 503,000 copies sold, a then-record for the biggest U.S. opening week of sales for a female artist’s debut album, according to Luminate. Lead single “Foolish” topped the Hot 100 for 10 weeks, and thanks to that hit, “Always On Time” and “What’s Luv?,” Ashanti became the first female artist to simultaneously chart three songs in the Hot 100’s top 10. Follow-up singles “Happy” (No. 8) and “Baby” (No. 15) also proved victorious. Ashanti went on to win the Grammy for best contemporary R&B album in 2003; it has sold 3.7 million copies in the United States, and its songs have amassed 788 million U.S. on-demand streams.

Two decades later, the singer-songwriter spoke to Billboard about rerecording Ashanti and retaining ownership of her masters, publishing the children’s book My Name Is a Story (July 12; HarperCollins Publishing), producing and starring in the upcoming film The Plus One and being honored with a star on the Hollywood Walk of Fame in April. “It’s still hitting me,” she says of the accolade. “It’s a reward after the good times, bad times, tears and moments of rejection.” 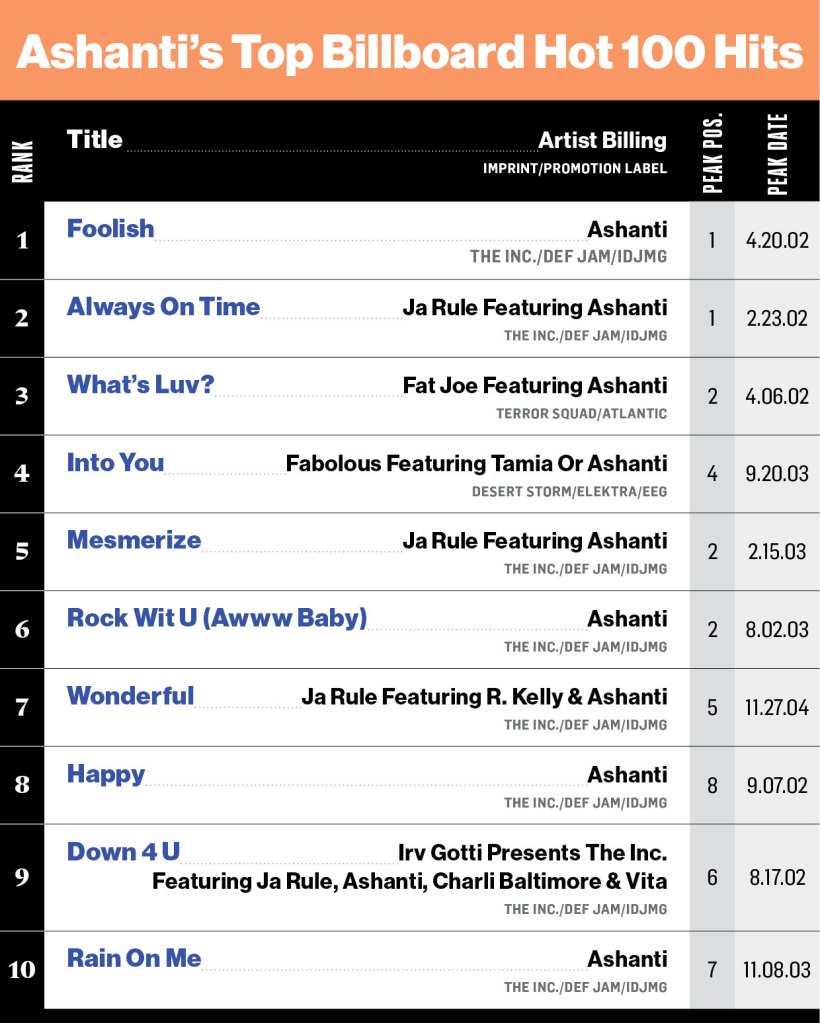 You announced on the Tamron Hall Show in September that you would rerecord Ashanti and regain ownership of your masters. Where are you in that process?

After 20 years, I got the rights to rerecord my Universal [Music Group] albums and material [plus my album Braveheart] and own those new masters. I’m rerecording my first album now. The timing is perfect with Apple Music and other [streaming services] because everything is getting remastered anyway.

There were definitely obstacles [to gaining my right to rerecord]. Certain people don’t want to see you move forward and progress in life, so they try to create roadblocks. You need a strong legal team to support you and make sure you’re doing everything correctly. It’s really important as an artist to continue to spread the ownership narrative. I love what Taylor Swift did. Anything worth something will be a bit of a battle.

What’s the secret to your staying power?

It’s a combination of training, hard work, having an amazing team and connecting with fans through timeless music. All those things collectively aid in longevity. I create what’s in my heart, writing genuinely about real-life situations. My music is universal, but it comes from the soul of R&B. I didn’t know that 20 years later, “Foolish” would still rock out the way it does. It’s cool for men to sing it even though it’s a female R&B record. From doing intimate stages to 30,000-seaters, hearing people scream lyrics that I wrote so long ago — the love that comes back is a priceless feeling.

What is one key lesson you learned early in your career?

To know that you’re going to get rejected a lot and to not take it personally. The sooner an artist understands that he or she is looked at as a commodity and not a person, the better off the artist will be. It’s a business: People are going to smile, give you hugs, laugh and cheer you on. But the minute you’re not making or generating any money, you’re [considered] dead weight. I learned that from my second record deal. It became a real character-builder for me. Even at 16, I was reading contracts.

You broke into the industry at such a young age. How did you sustain your confidence and avoid the pitfalls that face many young artists?

A lot has to do with the way I was raised. My parents are still married; they and my family have always instilled in me to be confident, to stand up for myself and be humble. My grandfather was a civil rights activist; my aunt worked as a principal at my high school. I was the girl in school that would stand up to bullies. I’m fortunate to have had an amazing support system, and that definitely played a part. A lot of my peers didn’t or don’t have that. I’ve seen people put themselves in unfortunate situations, feeling like the only alternative is doing something they probably would not want to do. 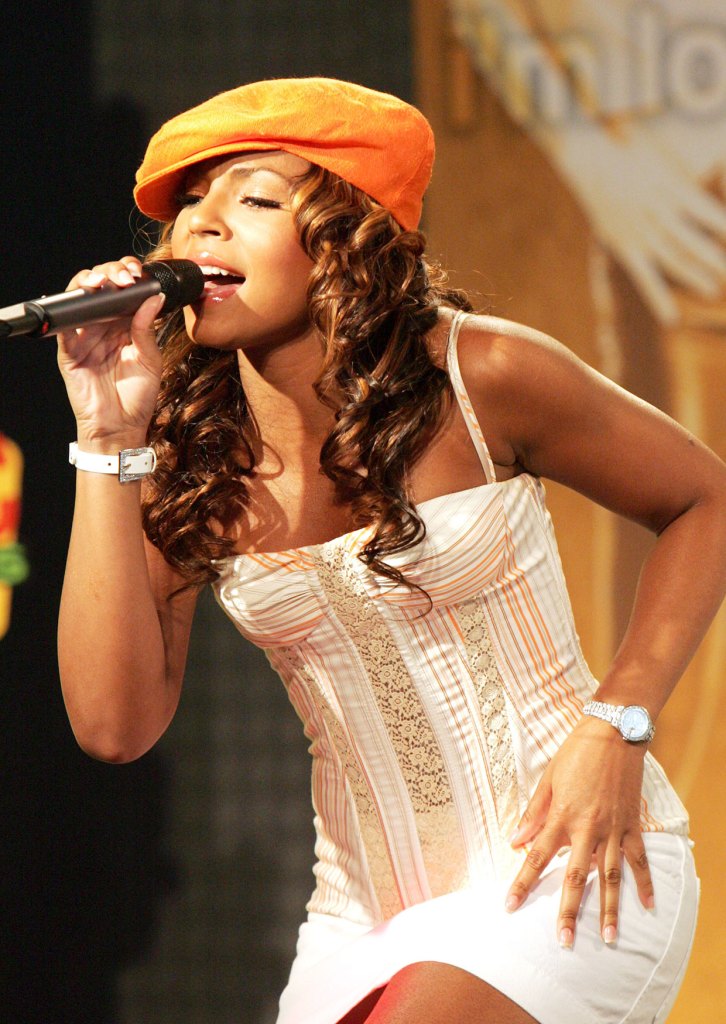 Your mom still oversees your career. How do you balance your relationship as mother and daughter with that of artist and manager?

My mom and I have more of a friendship as opposed to a dictatorship. We’re super close as mother-daughter, but the males and females on my team call her “The General.” She’s very supportive and aggressive when necessary. She demands that respect, so it’s a natural thing that developed [with the team]. I don’t have to worry about my mom stealing from me or looking at me as a commodity. When you can find someone who’s smart, powerful, stern, personable — and who genuinely loves you — that’s a priceless combination.

What can you share about your unreleased song, “Falling for You,” produced by and featuring Yung Bleu?

I’m very excited about that. We’re shooting the video for the single very soon, and it should be out this summer. He leaked it and wrote on Instagram, “I know she’s going to be mad at me.” I was mad. (Laughs.) It’s a very Ashanti, heartfelt song but still witty, and you can bob your head to it. Fat Joe FaceTimed me as soon as he heard it and was like, “Sis, you have to put it out now.”

What was the biggest turning point in your career?

Going independent. Over the years, I’d had seven record deals from seven majors. My last album on a major was 2008’s The Declaration through Universal. I made the leap after that, putting out my first independent album, Braveheart, on my label, Written Entertainment, in 2014. It was one of the scariest moments I’ve ever experienced, but it was also a very pivotal and crucial moment.

Why did you choose to go independent?

I didn’t like what I was being offered by labels. At that time in the industry, 360 deals were huge. People were giving away a lot of their rights, property and ownership. I felt it was really disrespectful to me as an artist who has generated hundreds of millions of dollars for these huge record labels. For them to have their hand out the way they did was crazy. I had too much respect and integrity for myself.

I’m working on my own documentary. It’s better coming from me and my experiences. My mom is known as the original momager, and she has footage that the world has not seen that is so sacred. People will be floored by the footage and stories that haven’t been told, which I’m super excited about.

You’re the co-owner of EQ Exchange with tech entrepreneur Janice Taylor, which is touted as the first female-owned Web3 company in Silicon Valley. You also launched a line of non-fungible tokens. Why is it imperative that women, especially women of color, enter this new arena?

Because it’s a world that’s dominated by men and it’s the future. We’re comfortable now on Web2, which is Instagram, Facebook, Snapchat and Twitter. But Web3 is the ability to own your intellectual property, and that’s important. As a Black female, spreading the narrative that we can own our creativity and get paid for it is important. It’s a testament to evolution. We went from cassette tapes to CDs to streaming platforms and now NFTs. It’s an ever-evolving industry, and you have to be on top of it to continue to evolve, learn and expand the empire. Stepping into this realm is also about empowerment. If young Black women see that I can do it, hopefully that inspires them and other women to do the same.

This story originally appeared in the June 25, 2022, issue of Billboard.

Ashanti’s New Chapter: Re-Recording Her Debut Album and Taking Inspiration From Taylor Swift Ashanti Douglas was set to become an Olympic athlete, but her life ended up going in a different direction. A standout runner on her Glen Cove, N.Y., high school team, she was scouted by the Olympics and later earned track scholarships to both…